Considering the number of times I went up to Baildon Moor while I was still working I am a little surprised that Friday was my first visit for a while. Perhaps I am taking this relaxing too far now that I am retired?

One of the first things I did after getting up there and strapping my camera around me was walk up Bingley Road a bit to ask the person standing by his car where he got permission from to fly on Baildon Moor. 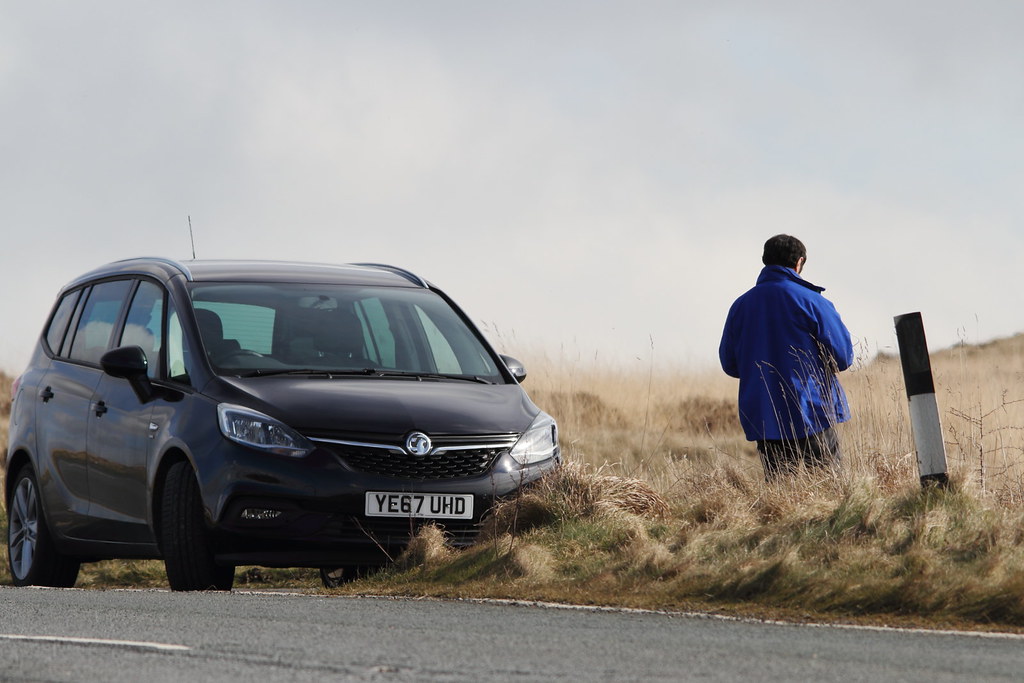 It went pleasantly and I politely pointed out that powered flight was not allowed on Baildon Moor, though Bradford Council, the land owner, can grant permission. I had guessed correctly that he was doing something like that because he was at the roadside with a cowled screen in front of him and his thumbs on a couple of joy sticks. Apparently he was flying a Mavic Phantom but I couldn’t see it until it came round and followed the busy road and settled in the air next to his car. It is impressive technology. He said he always checked on YouTube to see whether flying in particular areas was OK or not. I suggested that he checked with Bradford Council or Friends of Baildon Moor to confirm what I was saying. Given that he was also standing at the side of Bingley Road I would hope that he is also going to read the Drone Code. I did wonder about including the photo here but since he included me in his video I think it is OK.

However the main point of going up onto Baildon Moor was to look for wildlife – and I was not disappointed. 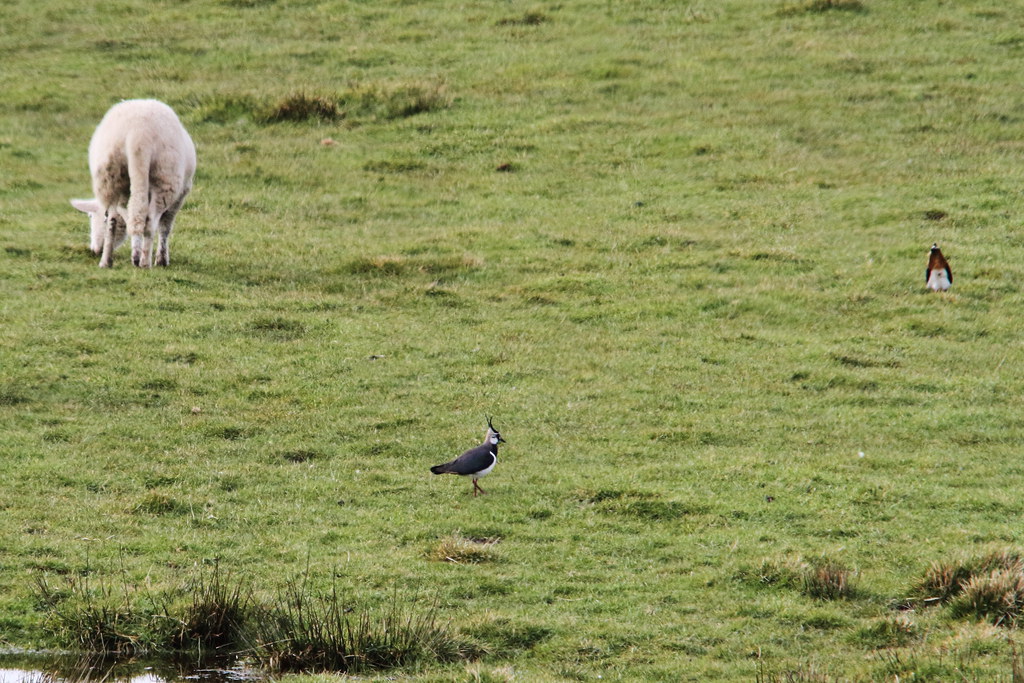 One of the first birds I both heard and saw were Lapwing. This is one of several red listed birds that uses Baildon Moor and surrounds as a nesting site. 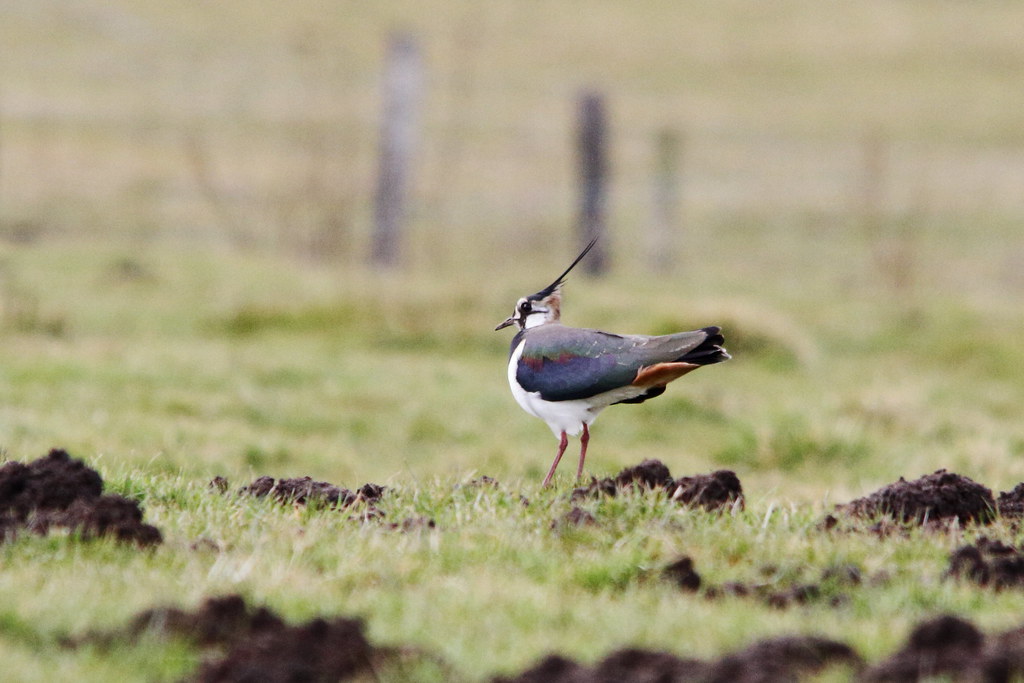 They nest in quite short grass, and what is it that keeps the grass short? Yep! Sheep and cattle. 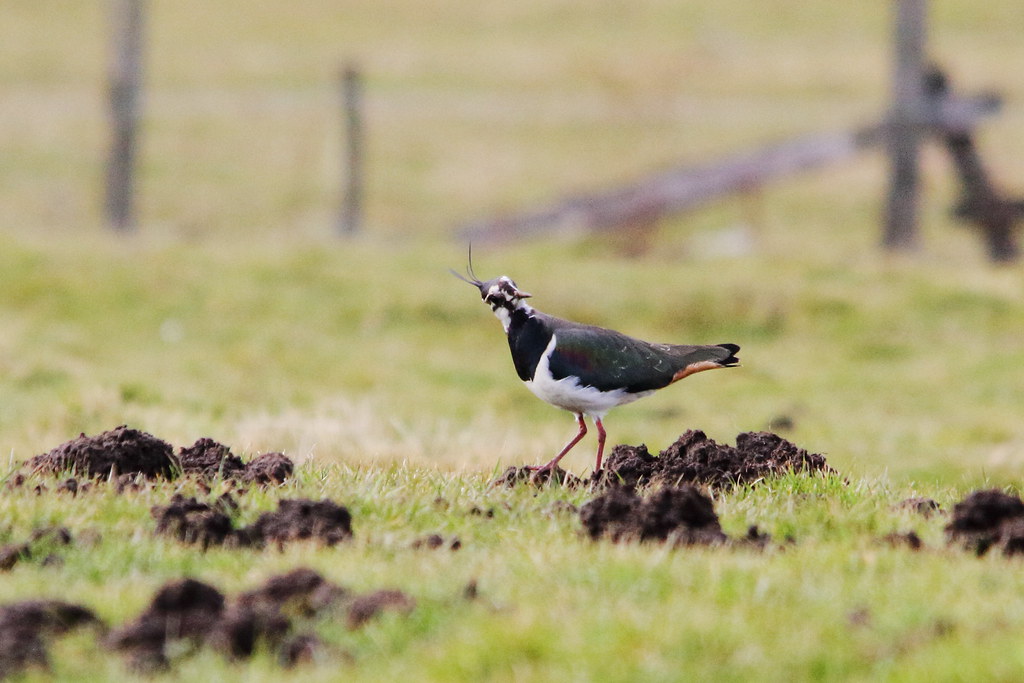 They seem to spend a lot of time watching what is going on around them so they can defend their mate and site. 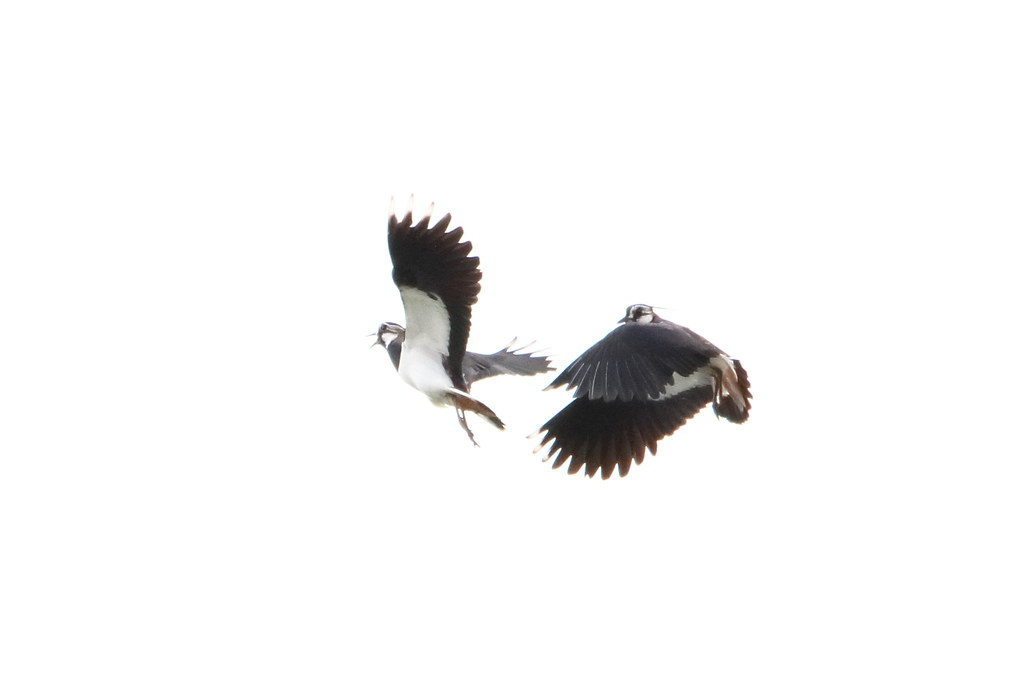 Wandering animals, wandering people, invading Lapwing trying to steal their mate, and any other large birds flying over are all threats. They also do display flights, diving and swooping about. Their call as they are doing this is great to hear. The call gives them their other name of “Peewit”. Later in the spring it is very noticeable that they take to the air and circle anything that is a potential threat, all the time calling loudly. If you walk near any of the fields they are nesting in you are sure to get them flying around you. 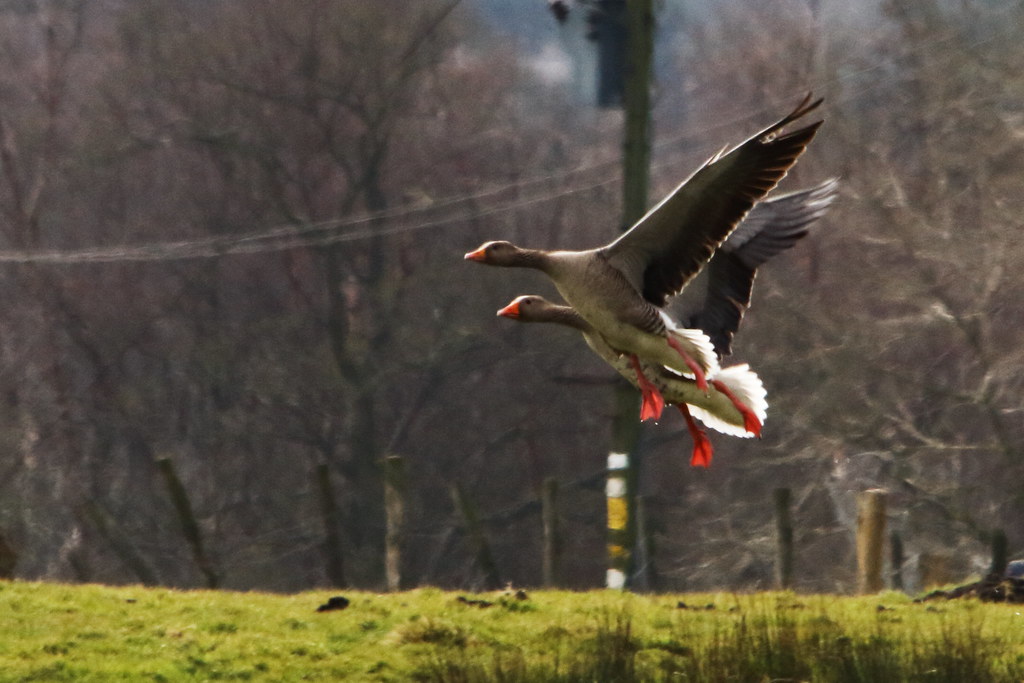 They seem Ok with Geese around. 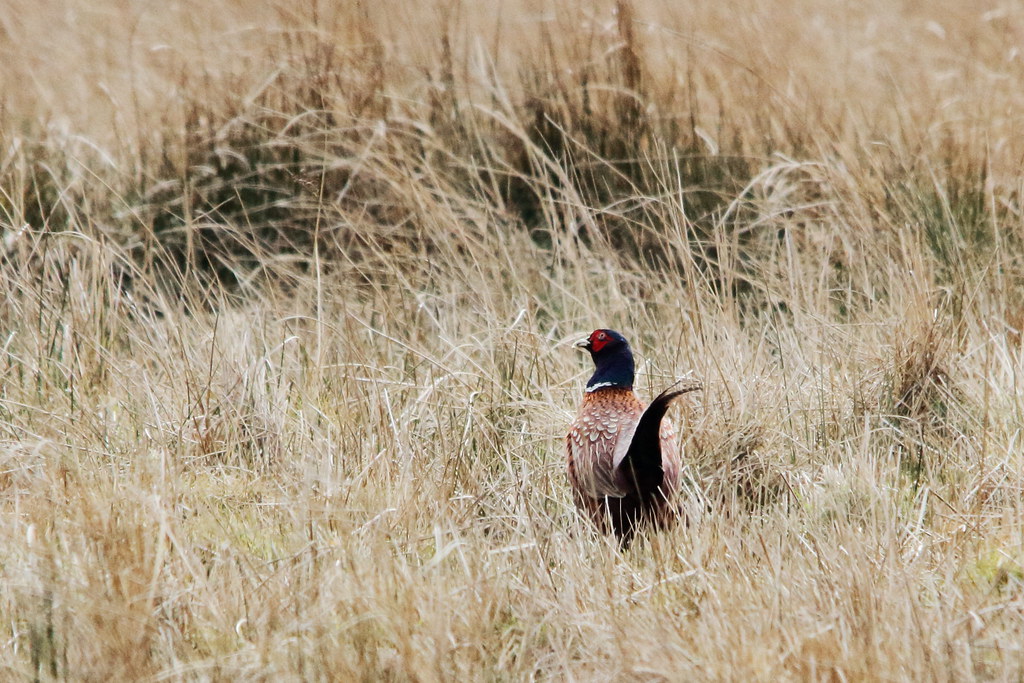 But I have seen Pheasant being dive bombed until they leave the field. 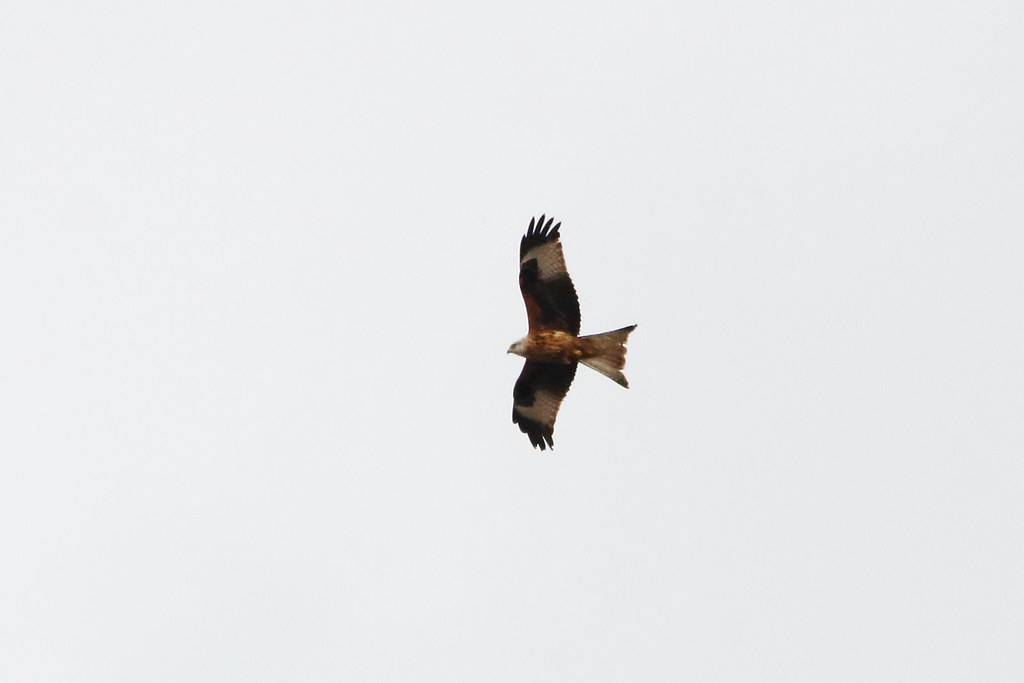 Birds that they certainly don’t like are Crows, Jackdaws and Redkite. This Redkite was further over but several Lapwing took to the air at that time but they could have been doing their display flight. One of the things I find amazing about Redkite is that you can see them circling overhead but within seconds they are a speck in the distance. 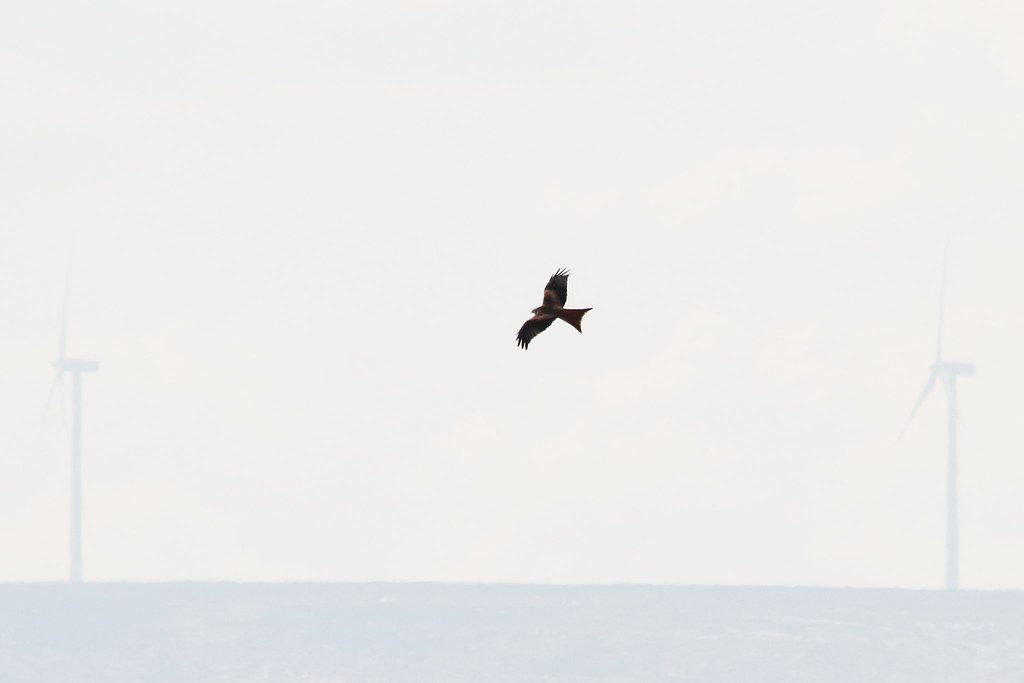 In this case drifting over towards Oxenhope and misty wind turbines in the distance. 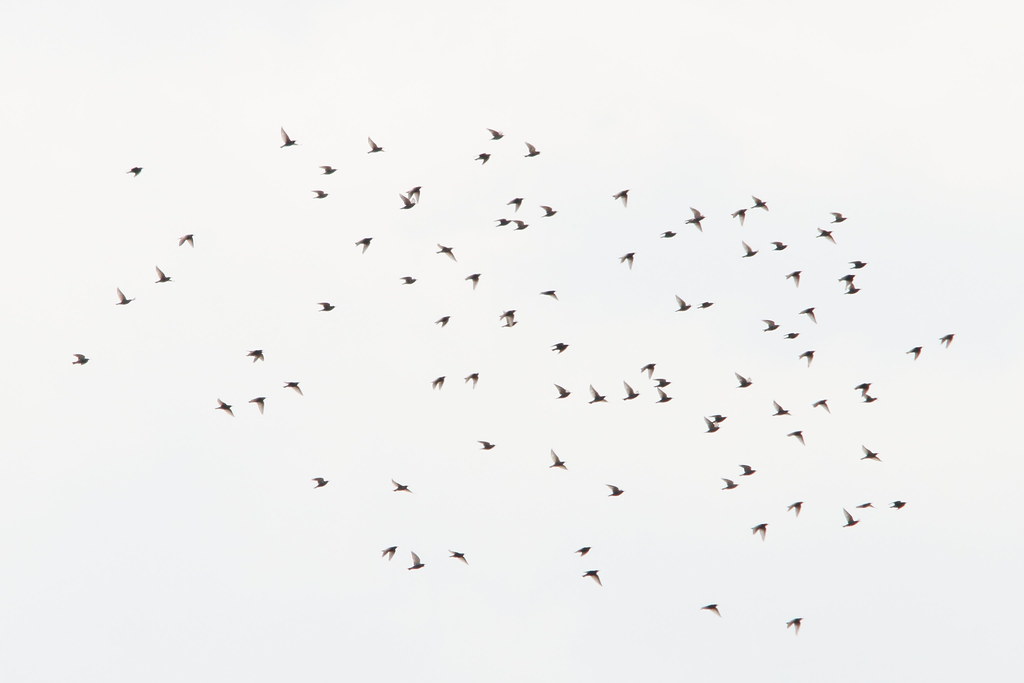 This is hardly a murmuration, which I have yet to witness, but just a small flock of Starlings. I am hoping to see Golden Plover flying around the Moors in flocks larger than this soon. They are about due. 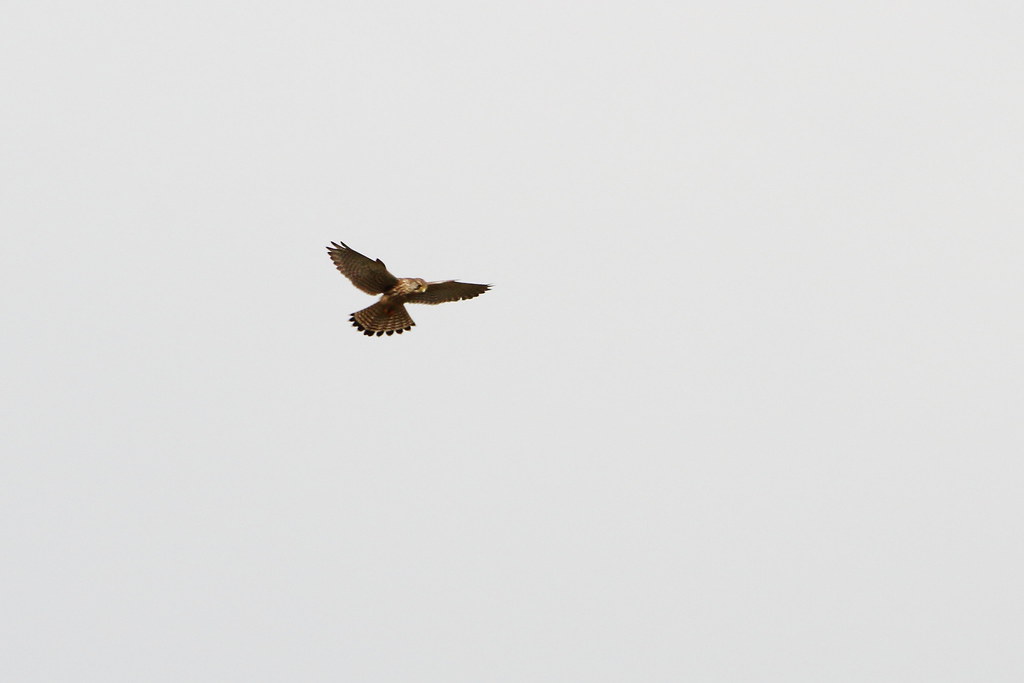 Seeing Kestrel hovering over the Moors was great. I don’t expect it is one of those that I have seen nesting at Salt’s Mill but Saltaire isn’t far as the Kestrel flies. 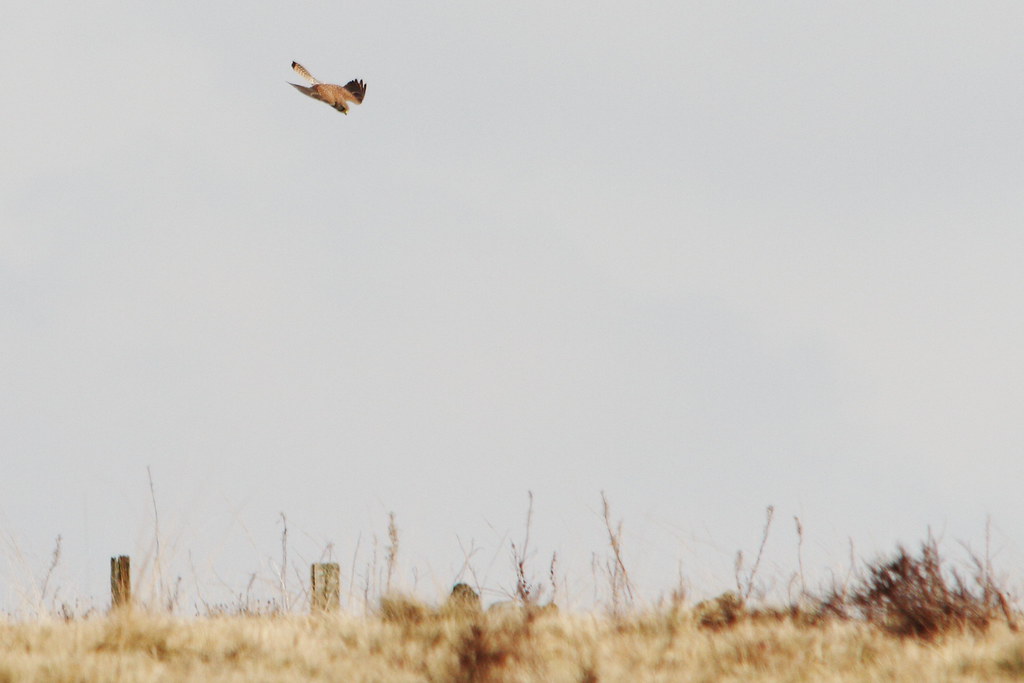 I have taken several hundred photos of Kestrel nesting at Salts Mill so it is great to see them out hunting. If you want to see more of my Kestrel photos have a look at this album – here. 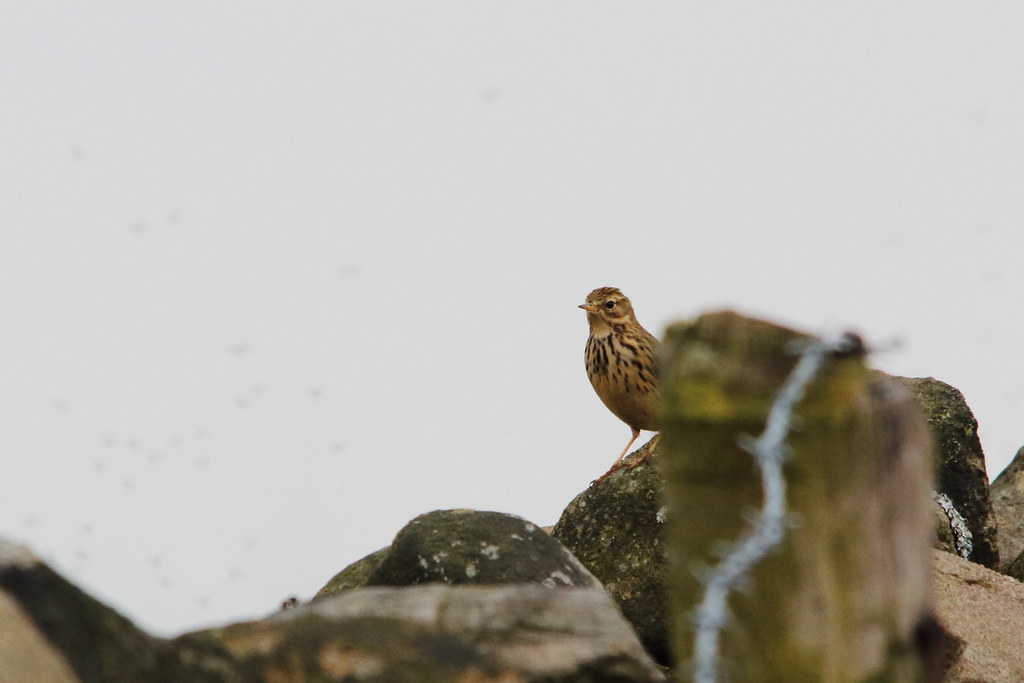 Quite a few Meadow Pipit were around, down in the long grass and the tops of the walls. The little smudges on the left of this photo are not dust specs on the camera sensor but out of focus flies. The bird seems to be eyeing some of them up for a snack. 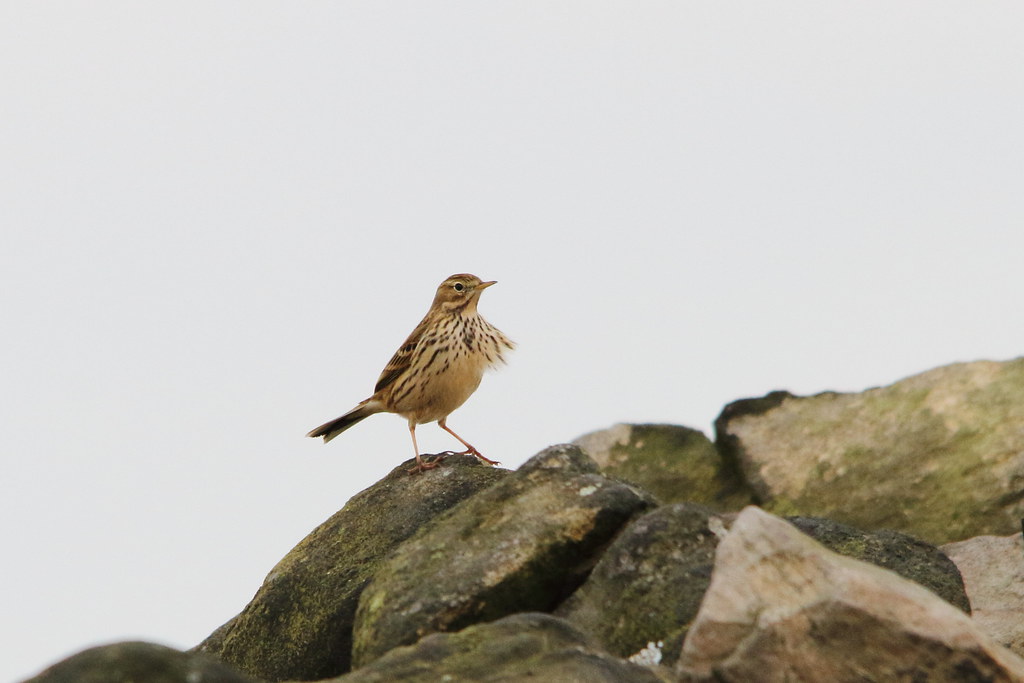 I don’t know what it is for, or why Meadow Pipits should be like that, but they have very long read claws. These walls were on my left as I was walking along. Over on my right, across the other side of the fairway the land sloped up. Over that way I could hear Skylark and after a while I managed to spot one up in the sky. This is another Red Listed bird. It is amazing that they manage to rear their young on Baildon Moor, the moor is so heavily used. It is great to see them running and feeding about the edges of the fairways later in the year towards Summer. And to see and hear them high in the sky is what Summer is all about. No photos though, I could hear them but only saw one that was a tiny dot in the sky. 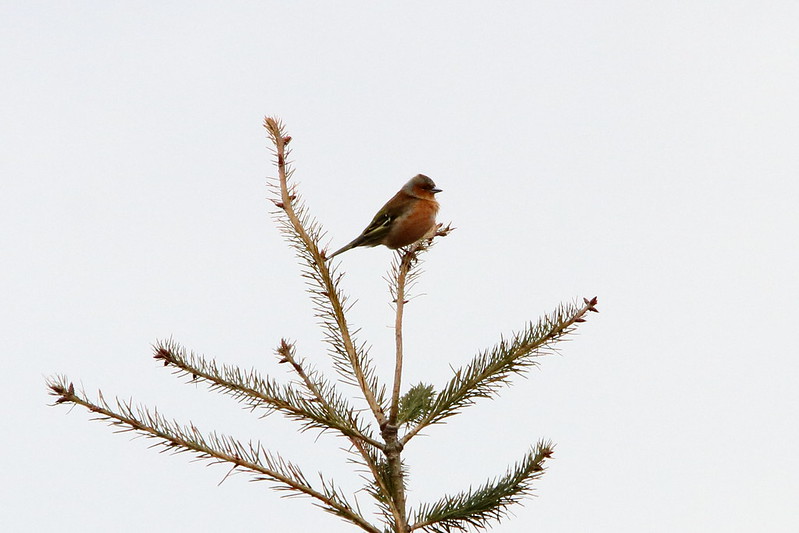 Further over, on the north side of the Moor, I heard a few of the smaller birds, Blue Tit, Great Tit, Robin and this Chaffinch singing quite loudly at the top of the tree. 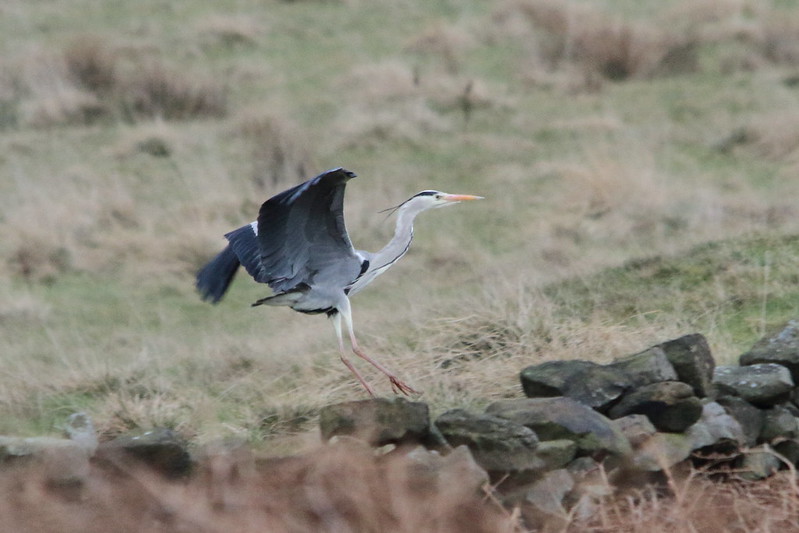 This Heron was also in the same area. They look like big birds but they are all wings, legs and neck. How they manage to hang all that off what looks like a small body I don’t know; nor how they make room for the big fish I have seen them eat.

While still pointing my camera to the East I saw some movement in the wall next to me. I glanced over at a hole in the wall and a Weasel’s head appeared. We looked at each other for a second with me trying not to blink or move and then it disappeared. I say Weasel because it was small but all I saw was its head. It was more grey than I thought they were. I don’t know if that suggests Stoat rather than Weasel. I have seen Stoats in the same sort of area before though. Have a look here at young Stoat and albino parent that I have seen around there before – here. 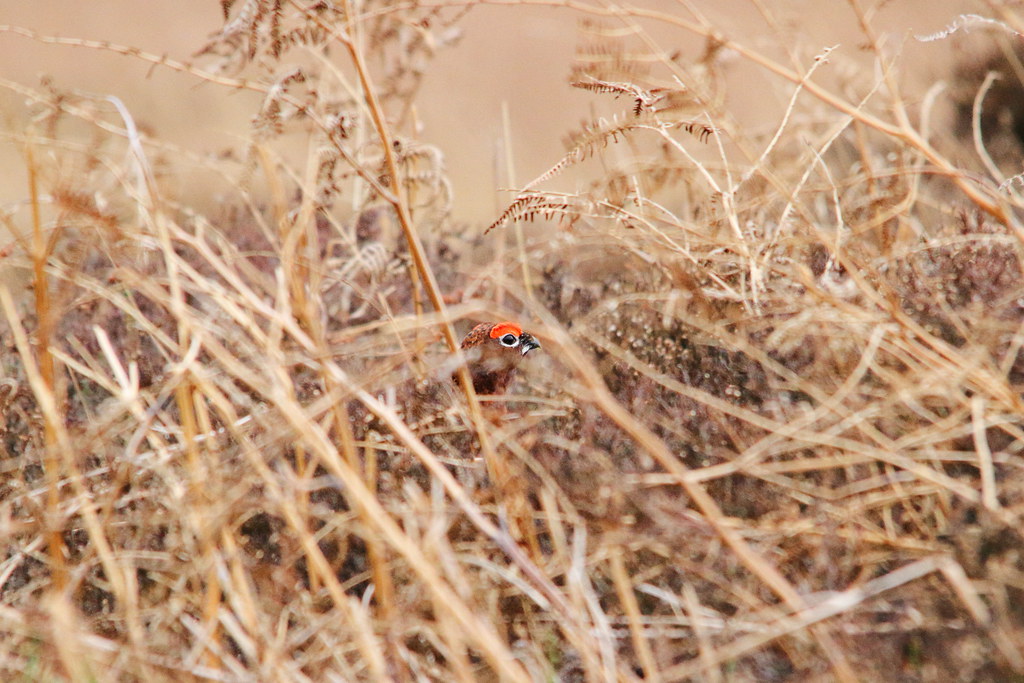 I then heard a couple of Grouse having a bit of a scrap. One of them waddled off but this one stayed around. Initially it kept itself low. 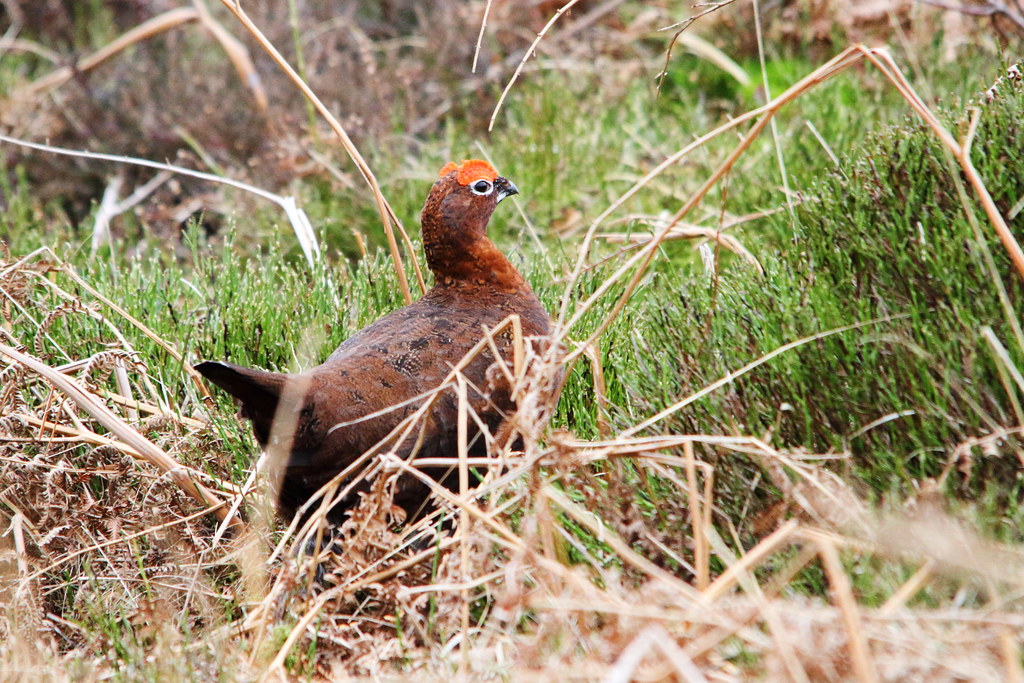 This male bird has its wattle inflated. A few minutes later the red was hardly visible – unless it was a different bird. It was aware of me but seemed reasonably relaxed, it pecked away at some of the Heather shoots around it. 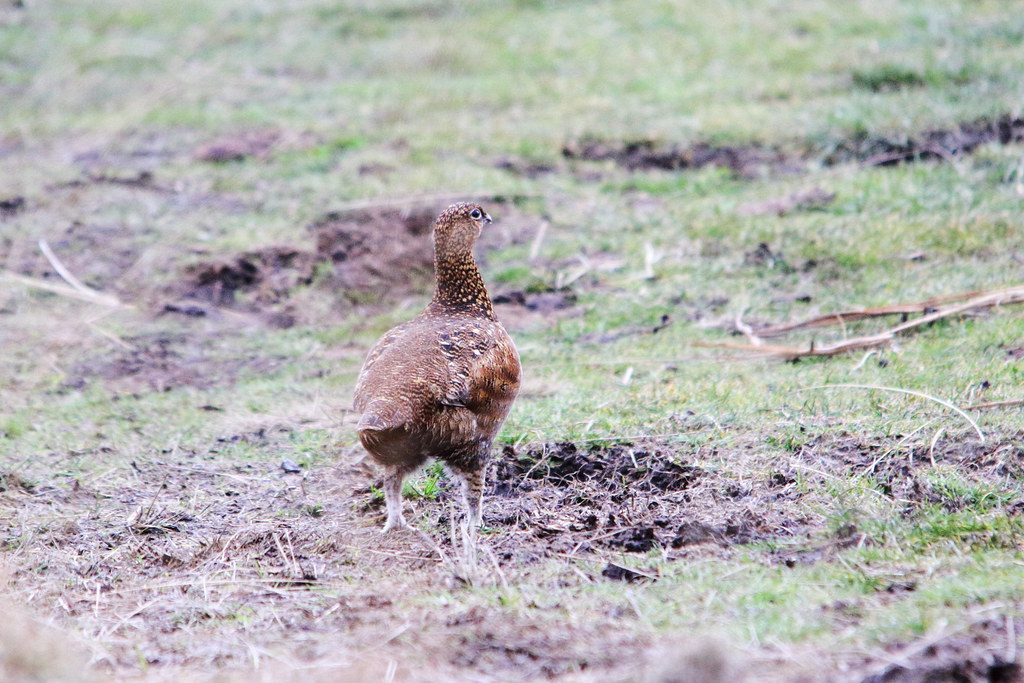 The female had kept itself well hidden until it decided to move to another clump of Heather. 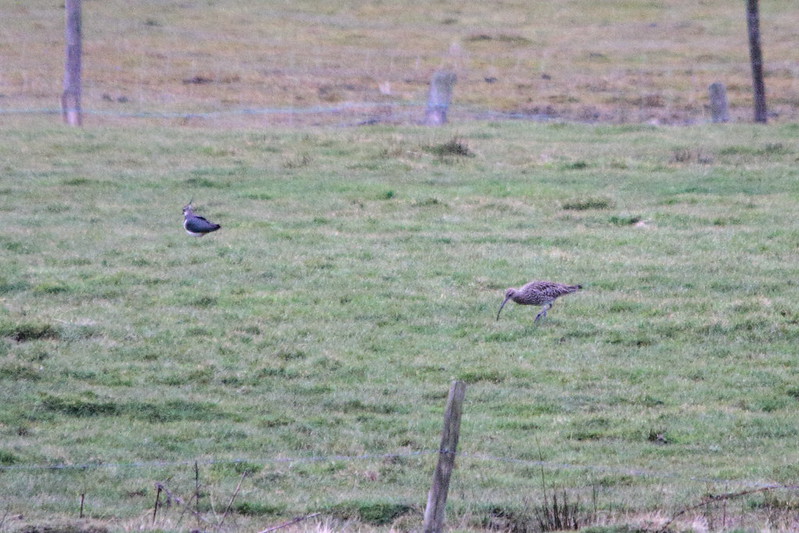 During the time I was out I kept hearing the eerie call of Curlew mixed in with the Lapwing. Curlew is another Red Listed bird. Several times I saw birds gliding in to land but they were too far away to say whether they were Curlew, Lapwing or Crows. Towards the end of my walk, retracing my steps, I did keep my eye on one suspect as it came in to land, it then was recognisable as a Curlew. The photo is heavily cropped and not very clear (the same as a few I took during the walk) but it is worth posting. In the past I have got a few decent photos of Curlew, this is one of the closer ones – here.

While I was out I had several conversations with walkers. It all adds to the enjoyment. There were several groups out doing their first walk for the Duke of Edinburgh Award. I had a chat with Award hopefuls and their guides/tutors/mentors about Heron, Redkite, Skylark, Meadow Pipit, Red Grouse, Lapwing, Curlew, Weasel, Chaffinch and Pheasant that were on the Moors. Hopefully they will be a bit quieter on future walks and pay a bit more attention to their surroundings but it was great to see them out and about.