On Sunday 20 May 2018 Bracken Hall Countryside Centre hosted a 2 hour walk  along Shipley Glen. It was guided by Paul King, a local birder who is also a member of Bradford Ornithological Group.

It was great having Paul guide the walk, he has tremendous local knowledge built up over many years of birding in Shipley Glen and Baildon Moor.

The trees in Shipley Glen are well established and as a result provide many habitats for a range of birds. The more noticeable ones, by their noise,  were Blackbirds, Crows and Robins; which is why it was useful to have Paul with us to show us evidence of those a little harder to spot. 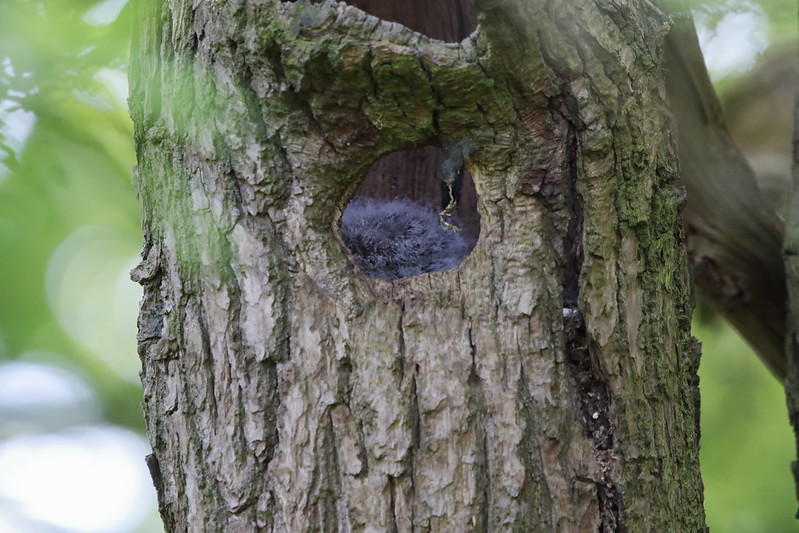 Like this Tawny Owl nest with fluffy chicks just visible inside.

Paul also helped us spot Treecreepers returning to a tree with food in their beaks to feed young in a hidden nest. He also showed us an area littered with slivers of wood, then, with a bit of careful searching we found the hole of the Woodpecker nest above us. We heard Woodpecker calling and hammering but I didn’t see any. We also heard Jays.

We then moved up onto Bracken Hall Green which provides a different habitat and so has different birds. Being more out in the open Wood pigeons and Magpie were more easily spotted. Curlew, Sparrow Hawk and Red Kite were also spotted. We could now see the top branches of trees and bushes and could hear the song of the Willow Warbler. 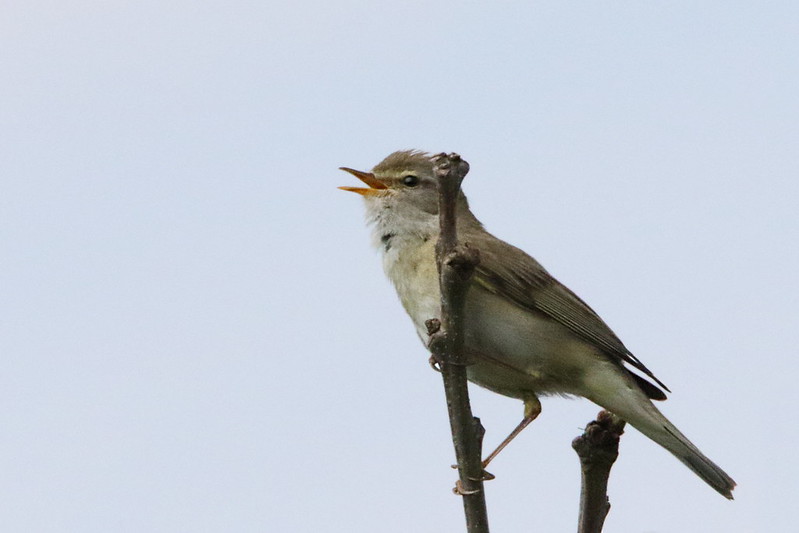 Knowing that the Willow Warbler would be near the tops of the trees or bushes we were soon able to spot it singing away. They are a Summer visitor to the UK, having spent Winter in Africa. 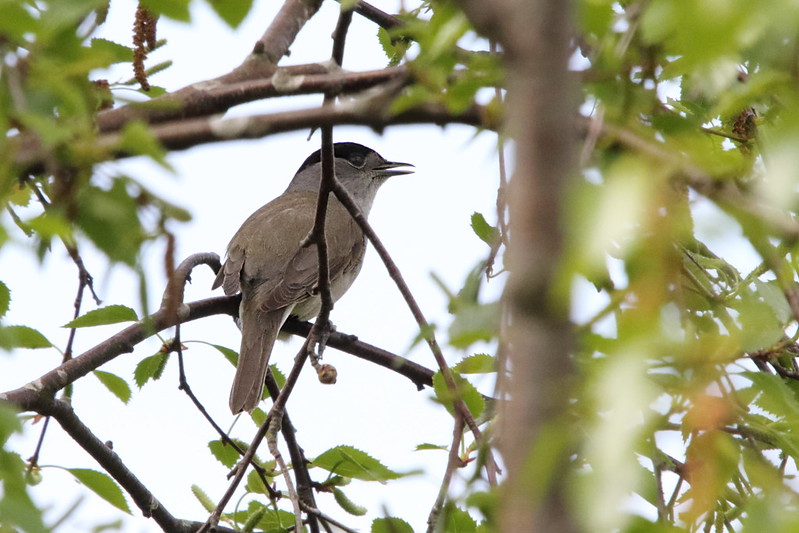 After starting back along the green to the centre we heard a Blackcap which was a little more secretive than the Willow Warbler but I still managed to catch sight of it. This is mainly a Summer visitor to the UK though some are starting to over-winter in the UK.

After the walk I decided to go back and retrace our steps and I am very pleased I did. I also went up to Glovershaw Lane/Bingley Road but I will cover that part of my walk separately.

The first area I went to on my unaccompanied walk was the area where we saw the Treecreeper coming into a nest with insects in its beak. 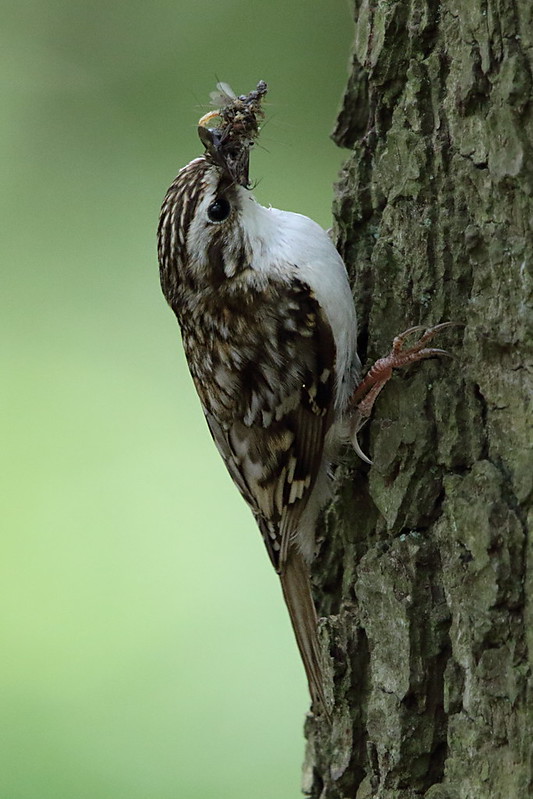 This one has an assortment of insects. I don’t know how they manage to get so much into their beaks. I assume they use their tongue to hold on to what they have while pecking for more. 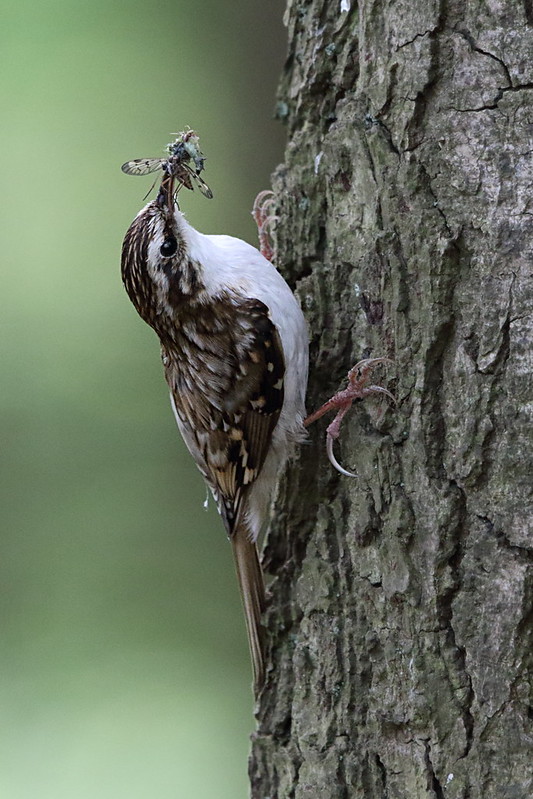 Note that this one has a slightly different line pattern in the white just above and in front of its eye. This shows that both the male and female are working at the feeding. And they seem to be doing a really good job. 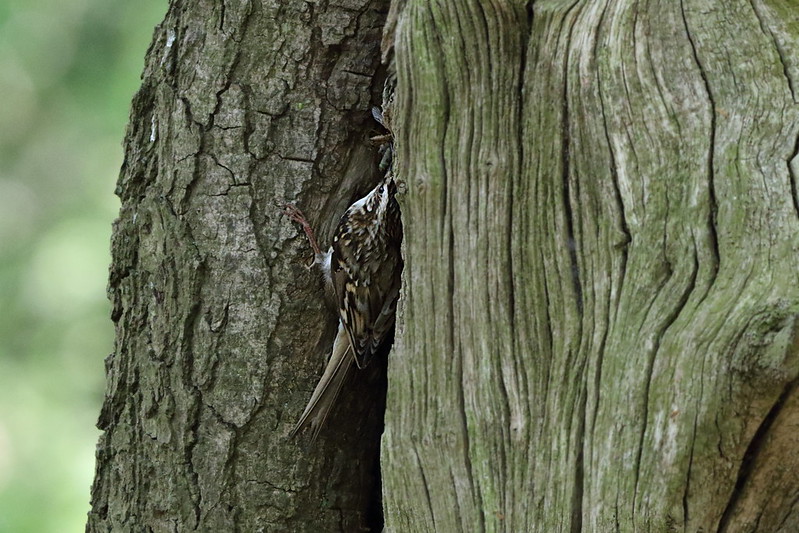 This photo shows one of them sidling into where the nest is. 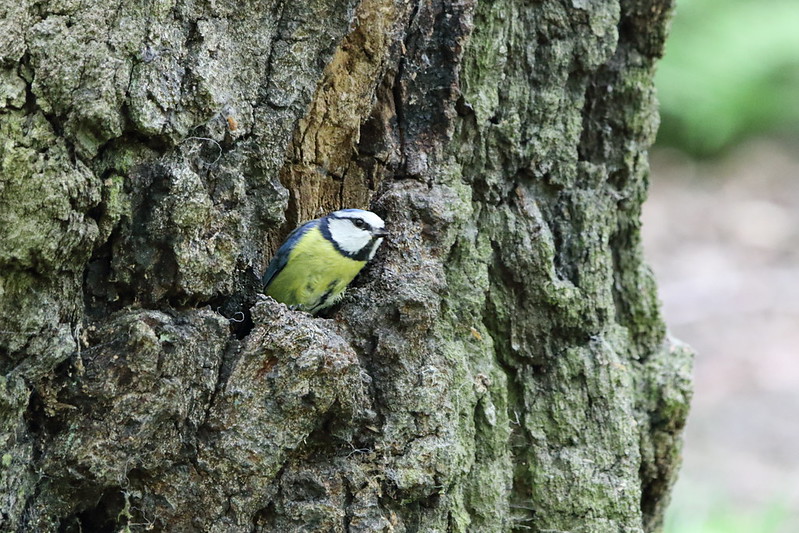 Paul told us of birds that nest close to or on the ground. But given that I thought Blue Tits tended to nest in holes under foliage seeing this one quite surprised me. It looks “normal” in this shot…. 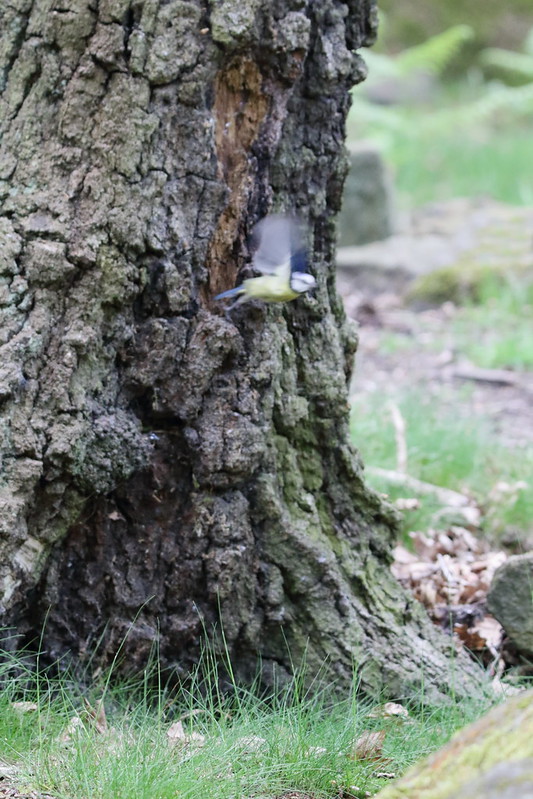 … but a wider shot shows that it is only a few feet above ground. 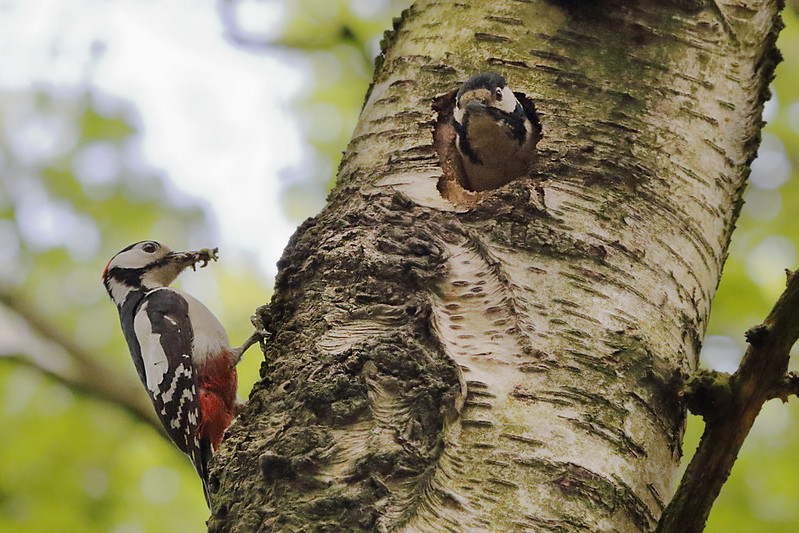 I then moved on to where we had seen the wood shavings on the ground and tried to make myself look like part of a tree. It seemed to work because the parent Woodpeckers went to and fro with food for the young in their nest. This is the male with food waiting for the female to leave the nest. The male has a red patch on the back of its head, the female doesn’t. The juveniles have a red top to their heads. Hopefully I will get some shots of that another day. 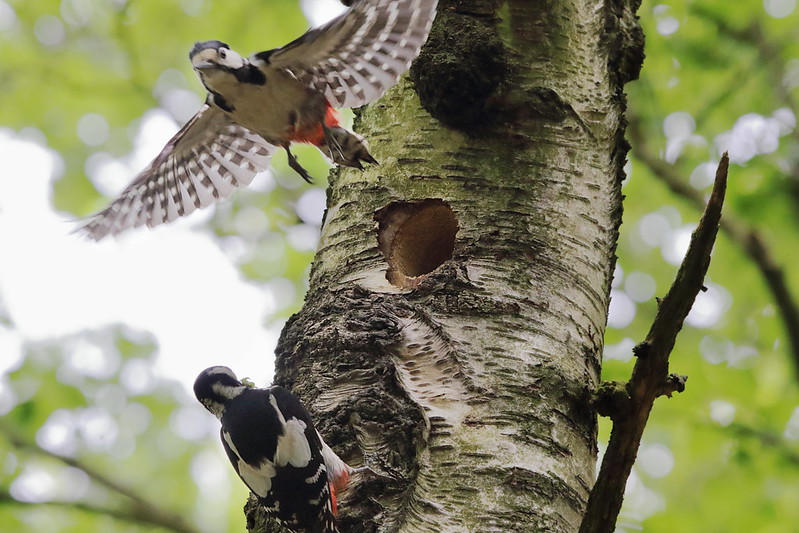 They took it in turns and this is now the male leaving the nest while the female waits to go in with the food she has. I quite like this one and have used it as the featured image for the posting. You can see others in the Flickr album. 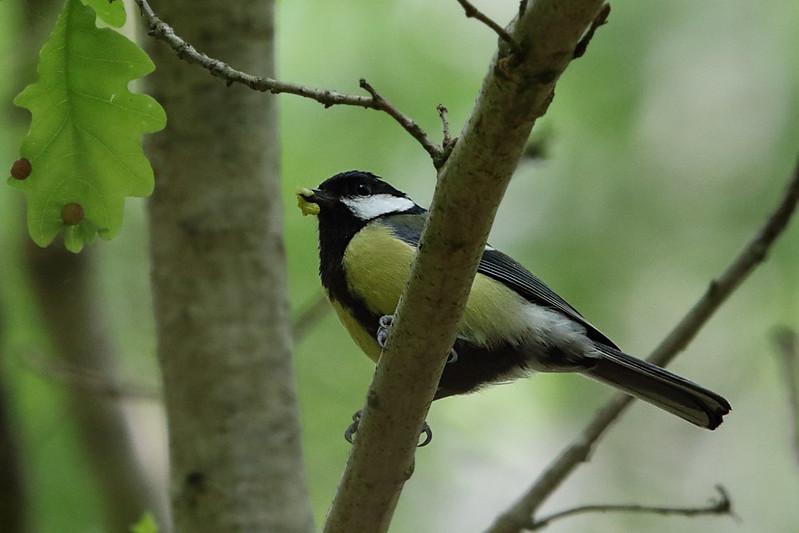 Continuing with the Spring theme of feeding young this is a Great Tit with food. 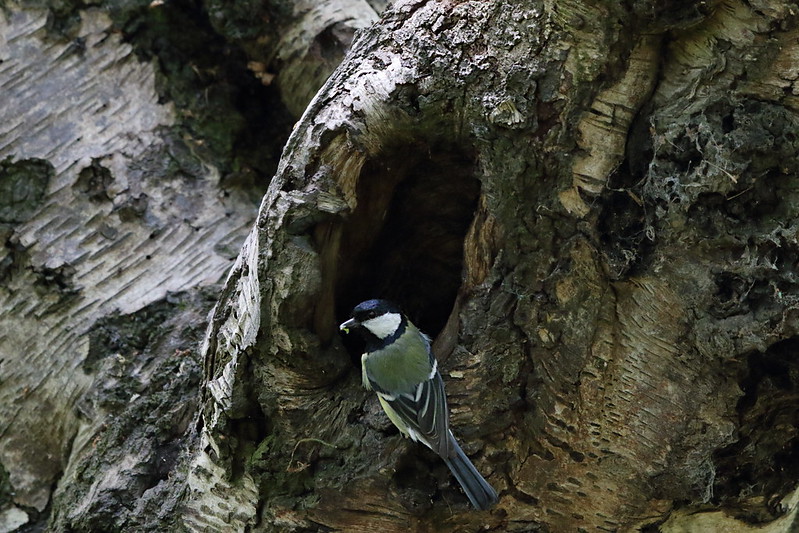 And this is the Great Tit at the enormous entrance to its nest. I expect that it narrows down significantly otherwise the chicks will be easy pickings for predators.

The photos from this walk are in an album on Flickr. You can click on any of the photos to view them on Flickr or go to the album where there are several others I took.