I was recently invited on a guided tour of Salts Mill by an Arris group called RISE (Relationships, Inspiration, Success and Empowerment.) and though I have been around many parts of the Mill in the past it is still good fun. Arris, when they were known as Pace, were one of the first companies to move into Salts Mill so they have a long relationship with Salts Estates and all the people on the tour were, or had been, Pace/Arris employees wanting to see a bit more of the iconic building they work in.

The photos from this tour can be seen in an album on flickr here.
They are also in a more general Salts Mill album here. And for views from the chimney of the mill have a look at this album here.

Robin Silver started the tour for us with some of the history of Salts, Salts Mill and his brother Jonathan Silver before we then followed our guides, Steve and Mark from Salts Estates.

Steve explained that there used to be three sloping cobbled routes between the mill building down to the canal but they had been built over as the building use changed. This photo is taken from the canal end of one of the routes that is in the process of being cleared. 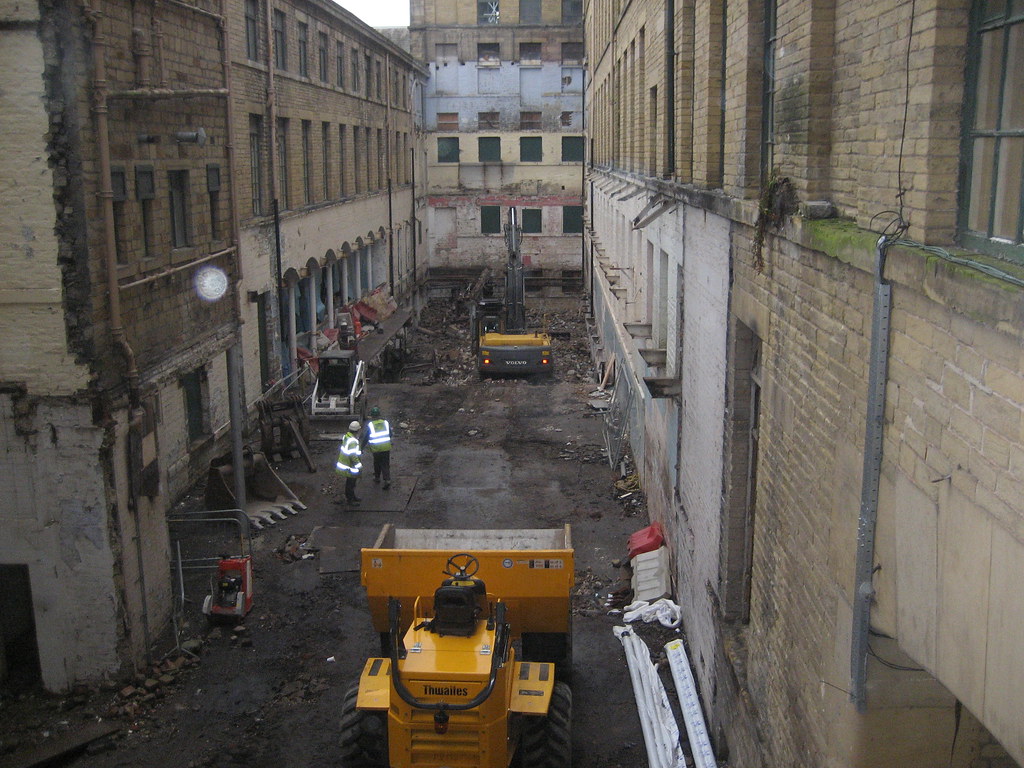 Several years ago a concrete and glass building and two floors were removed with the intention of creating Salts Piazza. This photo is from 2007 showing some of the major work in progress. It was taken from one of the windows that can be seen at the far end of the previous photo. Other photos of the work being done can be seen in the flickr album. 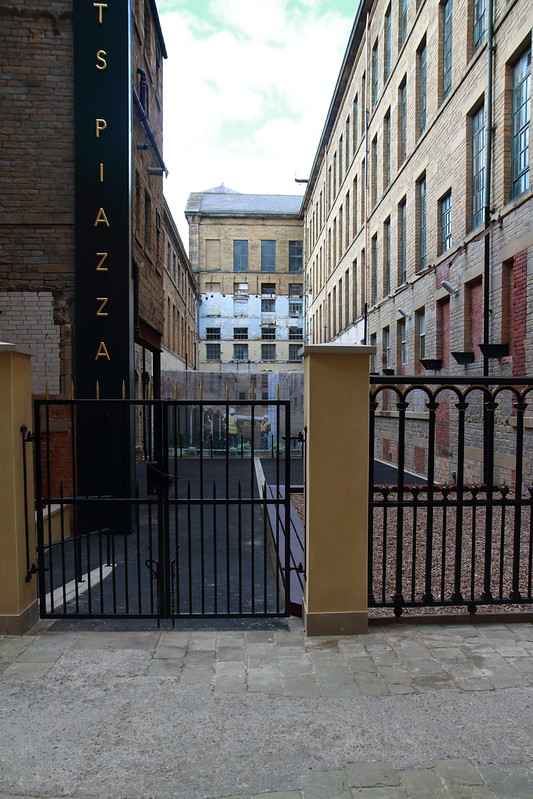 The photo above, taken in 2016, was taken at ground level. There is still a lot of cleaning and tidying to be done on the other side of the painted screen.

The small “dots” you can see at the top of the blue painted area of the far wall are holes left after the concrete and steel water tanks were removed. They are now nest holes for pigeons, Jackdaw and Kestrels. You can see photos of these Kestrels in this album here.

This is a view of one of the lower levels with my back to the canal.

And a store room for drive belts that would have been used in the later years of manufacturing.

An electric motor with pump attached on a wooden trolley.

One of the service passageways.

A store of old documents and catalogues from one of the later businesses to use Salts Mill before its closure and before Jonathan opened it up again.

The archways in the lower parts of the mill are made of substantial stonework.

Under the North-East section of the mill is a 500,000 gallon reservoir and every third cast iron pillar in parts of the mill is hollow to pipe the rain water into it. In some parts of the mill pressing your ear to a pillar and listening for the flow of water is a sure way of telling whether it is raining or not. This photo is of a vertical overflow pipe from the reservoir under the mill that then pipes the water under the canal to the river. You can see more photos of this in the album.

We are now getting towards the end of the tour guided by Steve and Mark. This is under the North West part of the mill. You can see some of what I think is air-conditioning equipment for the Pace/Arris offices.

Before moving to Salts Mill Pace used to be in one of five industrial units off Dockfield Rd. They needed to expand so made enquiries about moving into more of the industrial units. The owner of them thought that there was no future in the electronics business so said “No”. Pace then talked to Jonathan about Salts Mill. As a result Pace moved in and were up and running very quickly.

We then met up with Robin again in the roof space of the main part of the Mill. This space runs the full length of the mill and is quite impressive. Leeds Photographic Society use this for some of their exhibitions so their exhibitions are worth going to see if only to see the Salts Mill roof space.

Robin again told us a bit more about history and structure of the mill.

This is quite an impressive timber roof structure. Mark is just going to retrieve someone who had wandered off.

Tannoys and fans dumped in what was probably a supervisors office.

There are several things on display near the main public entrance

This is one of the machines on display at the mill.

Here we are with Robin Silver finishing off the tour in front of some of the many David Hockney works of art before we went through for coffee and cake.

One of the interesting things that Robin talked about was the company ethos of bringing together art, technology and business with no government support. Salts Mill is well worth a visit. Though you won’t be able to shine your torch in the cellars and passageways you will be able to visit the 1853 Gallery for art, books & materials, view David Hockney art work, eat at Salts diner, browse The Book Shop, have a coffee or lunch at Cafe into the Opera, see the People and Process Exhibition, buy modernist furniture, homewares or designer gifts at The Home, rummage through Carlton Antiques, view more of the Saltaire History Exhibition, have a coffee at the Espresso Bar, buy something for your loved one, or yourself, from Kath Libbert Jewellery, try out a new bike at All Terrain Cycles, get your outdoor/trekking clothing from Trek and Trail or see and buy from a collection of renaissance and baroque musical instruments at the Early Music Shop. And that’s saying nothing about the other places to go whilst in Saltaire.