On Saturday I went on a small Ingress expedition and took my camera and then on Sunday I had a purely wildlife walk with camera. So here are a few photos from this weekend. Some of them should have the #visitbradford tag.

The Sculpture Trail of Ferniehurst Dell, Baildon is a mission within Ingress so I went to capture and field the portals, something I have done on many occasions but it is always good to walk through the Dell. Sorry, but that portal link will only work for Ingress agents.

While walking through the Dell and capturing the portals I heard and saw many Blackbird, Robin, Wren, Jay, Blue tit, Great tit, Woodpigeon, Goldfinch, Squirrel and at least one Great Spotted Woodpecker. 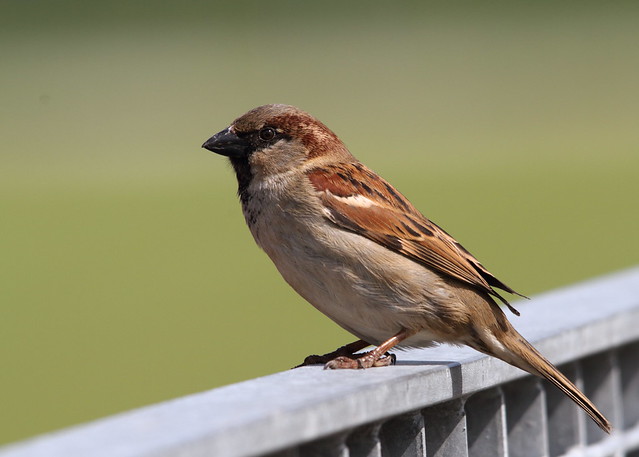 But at the top of the Dell is a bowling green and football pitch with Hawthorn hedges and a stone wall covered in Ivy running along a couple of the sides. In between them is a dusty gravel track. I interrupted my Ingress and spent some time watching the House Sparrows there. According to the RSPB the Sparrow population of the UK has declined significantly over the last 40 years. It is a bit difficult for me to confirm because I was brought up in Lincolnshire where over our back wall were wheat fields and a disused airfield with hangers full of seed. There was a lot of seed spillage and plenty of Sparrows to feed on it. I then moved to a very different environment around Bradford so you would expect to see fewer Sparrows. Farming practice and seed storage has changed a lot over the years so it seems reasonable to expect this to hit the Sparrow population. There are places you can see and hear them and some that I know of are the hedges along Glenaire Primary School, the hedges along Cliffe Avenue playground, the hedges by Ferniehurst Bowling Green, and in May/June along the Leeds Liverpook canal towards Hirst Lock.

Above is the dusty gravel track between the bowling green and the football pitch with 10 or so Sparrows having a dust bath. 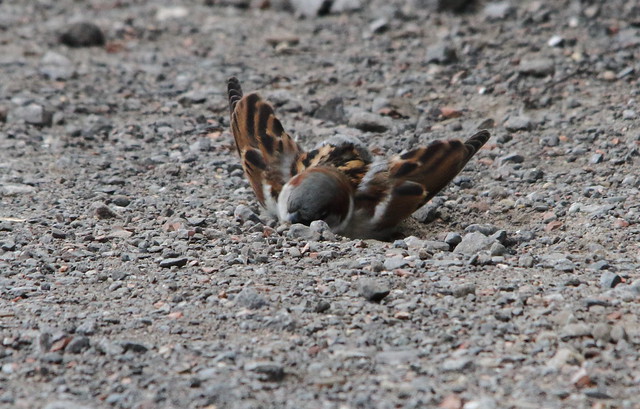 This male Sparrow is trying to get covered in dust. Apparently Sparrows are one of the of the more frequent dusters. 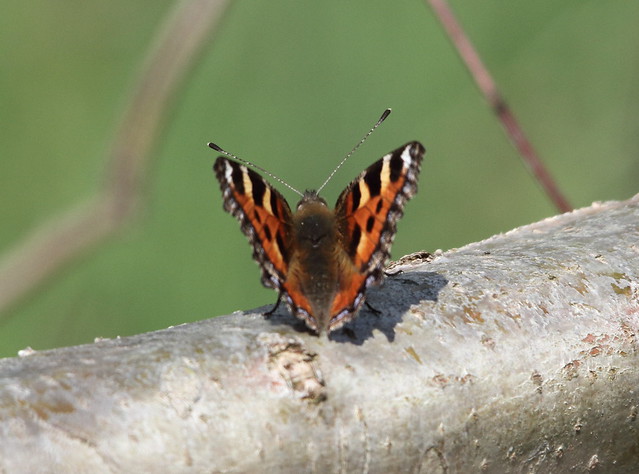 This Tortoiseshell Butterfly was near the fruit trees next to the Trim Trail of the Dell. I also saw a Hollt Blue but it was too quick to get a photo of it.

I then moved on to Golden Acre Park in Leeds and did some more Ingressing. This is a link to one of the portals there. 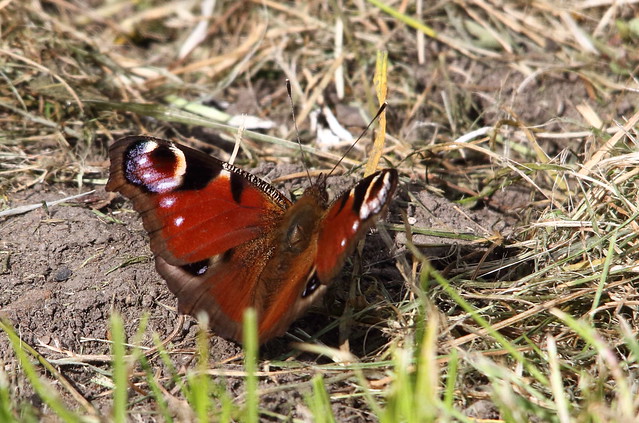 This Peacock Butterfly was on the edge of one of the paths in the park. One thing that was very noticeable about the bare paths through parts of the park was the number of little holes in the ground along the edges of the path. Most of the holes had a dusting of grit/sand around the entrance where it had been dug out by the mining bees. I saw several grey and black bees near the holes that I am pretty sure were Ashy mining bees. These are solitary bees that dig small holes with several brood cells for their eggs and young. 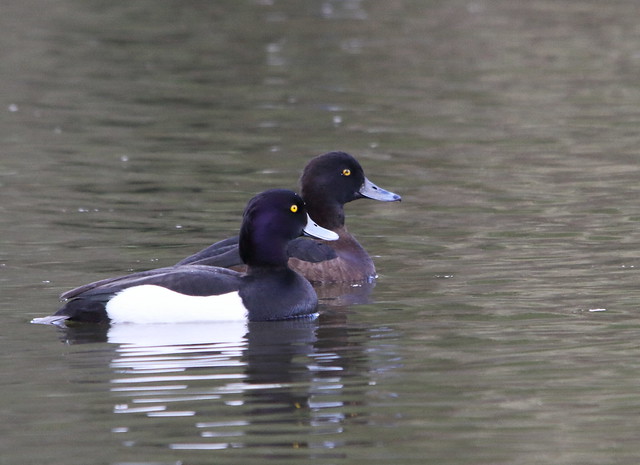 Quite a few ducks, geese and Swans were on the lake at Golden Acre Park including this pair of Tufted Ducks. 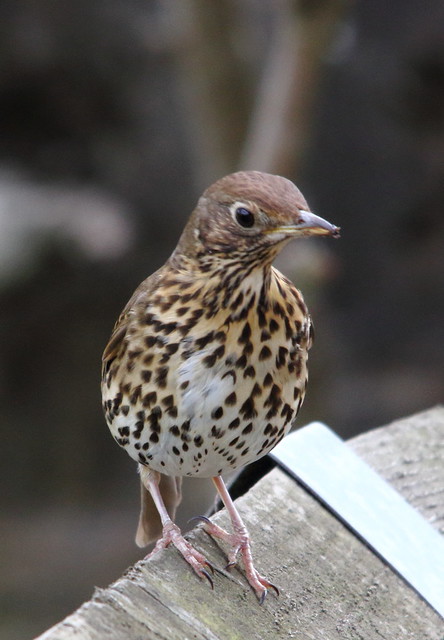 On the way back to the car this Mistle Thrush hopped up onto the fence but soon noisyly flew off again.

That is Saturday done. Sunday was a walk along the River Aire at Denso Marston Nature Reserve. It is a great place to visit and enjoy the river. 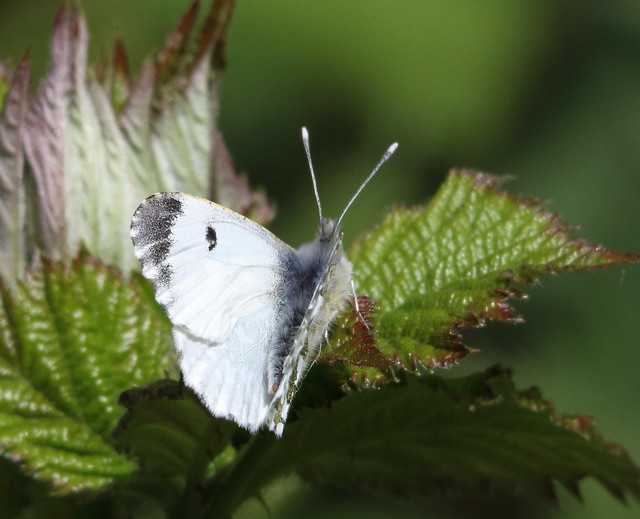 There were quite a few Orange Tip Butterfly flying up and down the banks of the river. I also spotted a Brimstone butterfly but couldn’t get a photo. 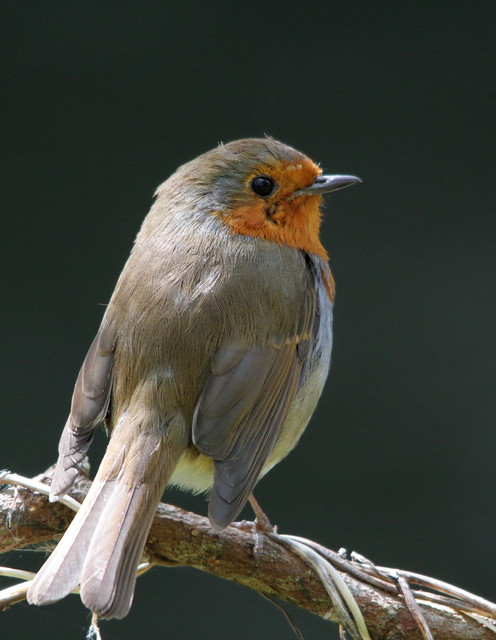 Robins were quite obliging though. 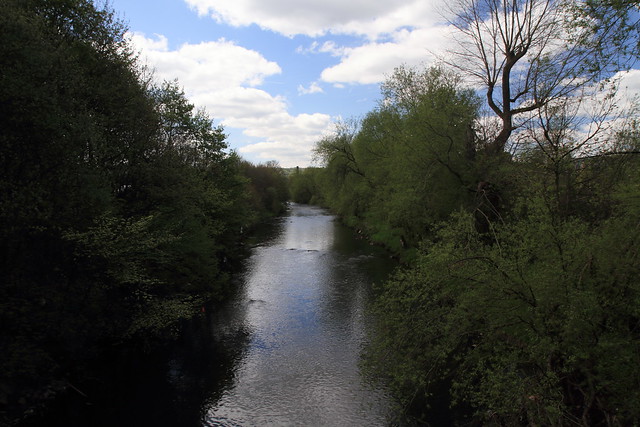 This shot of the river, looking towards Shipley, was taken from the footbridge over the river just across Otley Road from Midland Road. 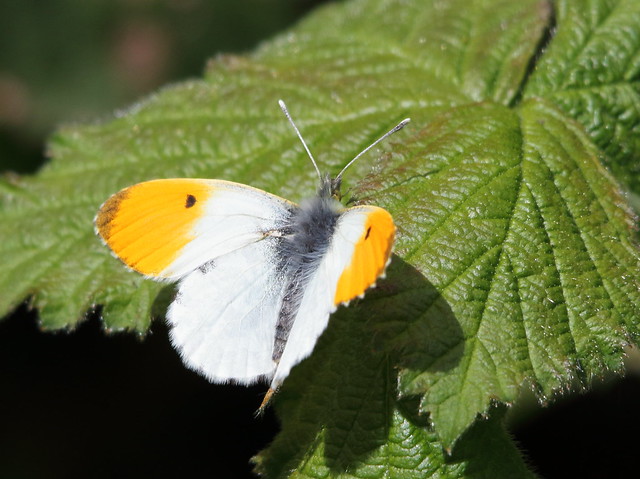 Another of the many Orange Tip Butterflies. This time with orange tips. 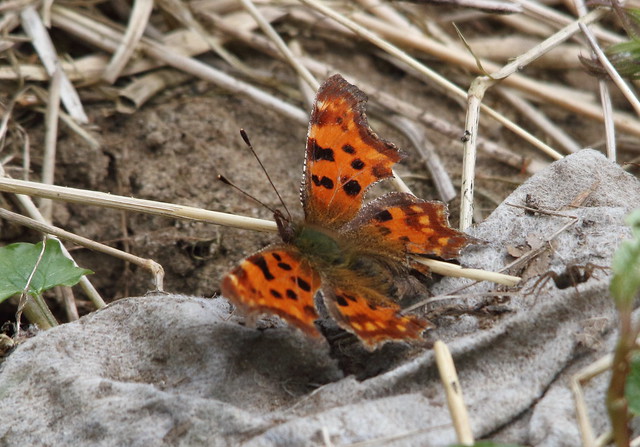 This Comma Butterfly was also flying along the river bank. I also spent some time by the ponds. 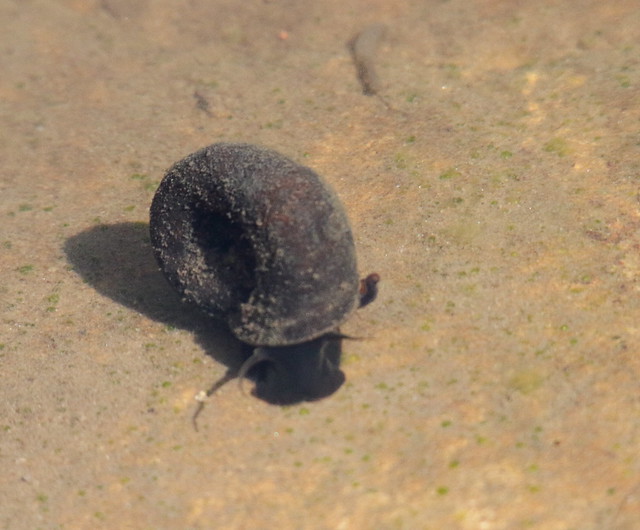 This water snail was slowly working its way across on of the large stone just below the surface. 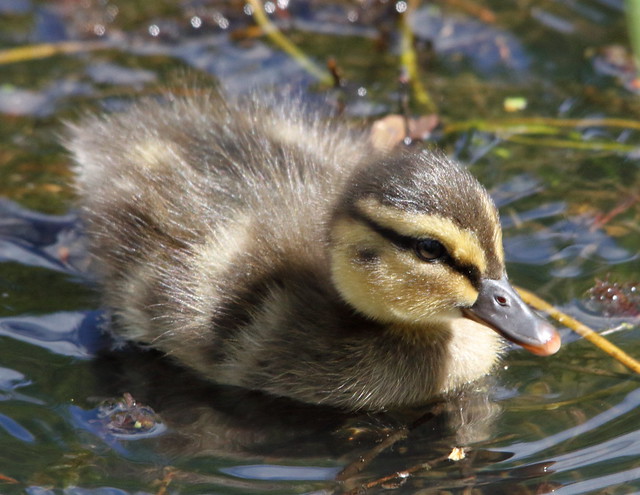 There was a family of ducks on the pond, mum and 5 ducklings paddling around. 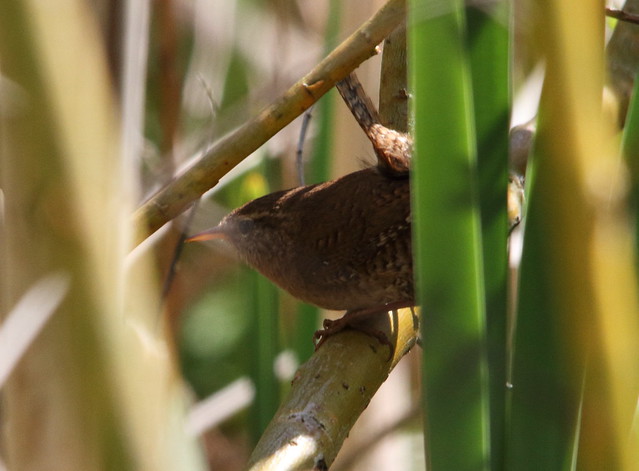 A Wren was keeping itself tucked away in the reeds on the edge of the pond. 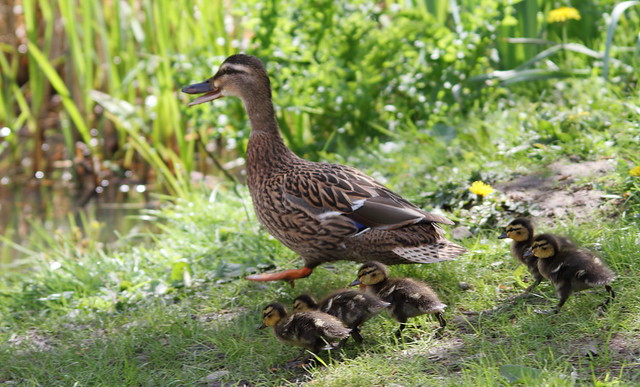 On a couple of occasions while I was there the whole brood came out of the pond to spend a couple of minutes under the feeders and then back they would waddle. 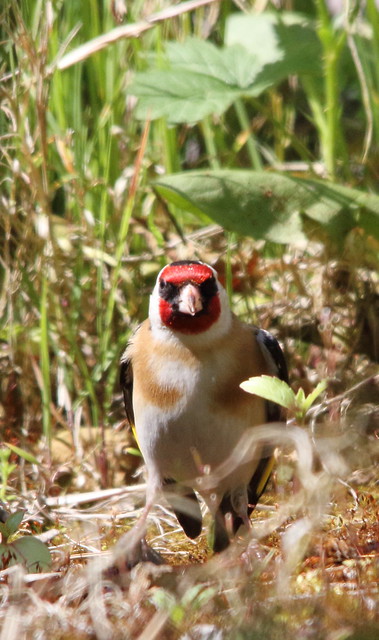 Just behind the pond, next to the fence were a couple of Goldfinch. I do think that is a rather stern expression. There seemed to be several small flocks flitting between some of the trees but these were feeding on something on the ground. 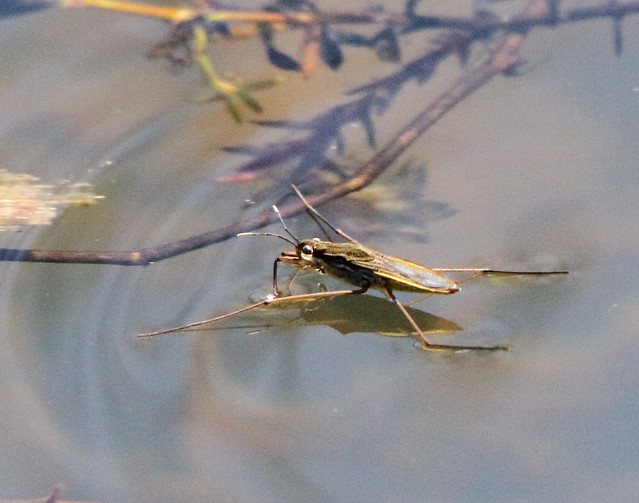 Water Skaters were zooming about the pond surface coming close enough for me to get some photos. 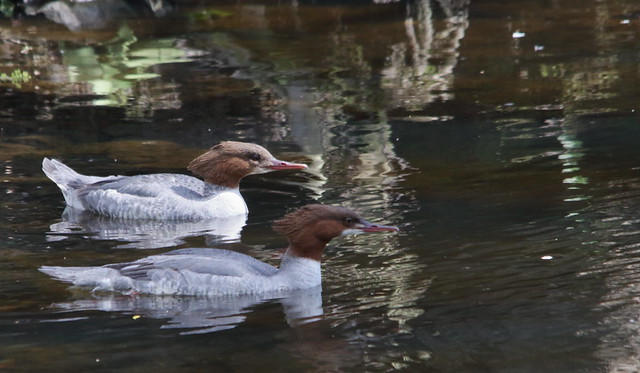 Towards the end of my visit these 2 Goosander paddled up river. I was on my way out but I wandered back again because of the varied bird song I could hear, and I am pleased I did because….. 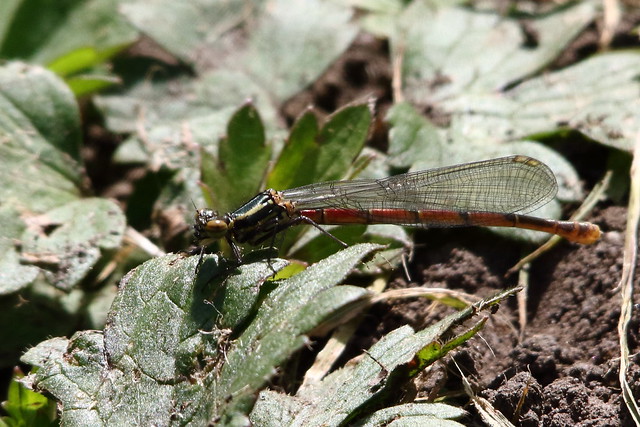 I think I was pretty lucky to spot this Large Red Damselfly at the reserve. I was near the stone seat at the time listening to Blackcap, Blackbird, Blue tit and Bullfinch singing. I let the Steve, the warden of the reserve, know that I had seen it because I know he has a bit of rivalry with Rodley Nature Reserve to see which has the first appearance. Steve let me know that the first time he saw one on the reserve this year was on Friday. 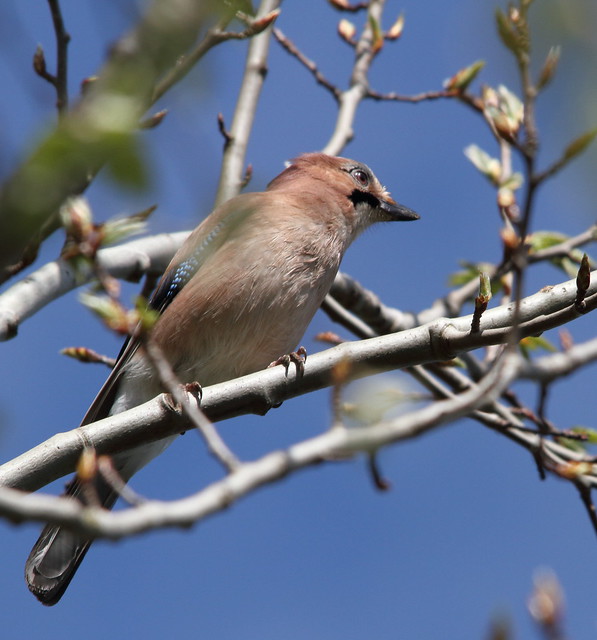 There were quite a few Jay flying around making a lot of noise. This one perched in a tree long enough for me to take a photo. 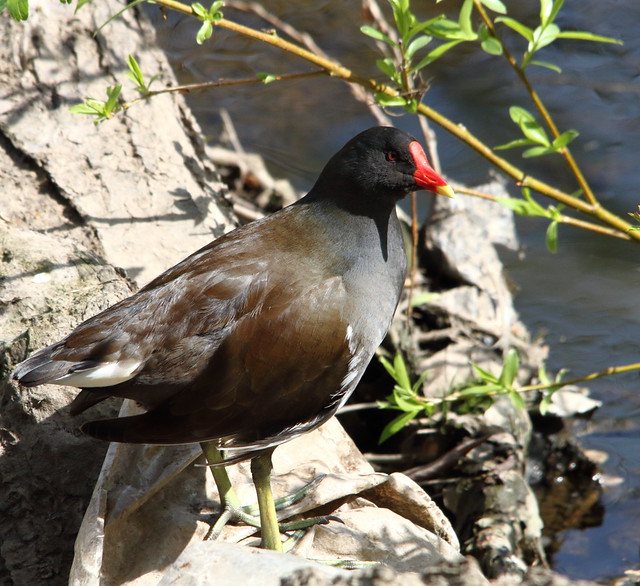 A Moorhen by the river looking very brown. 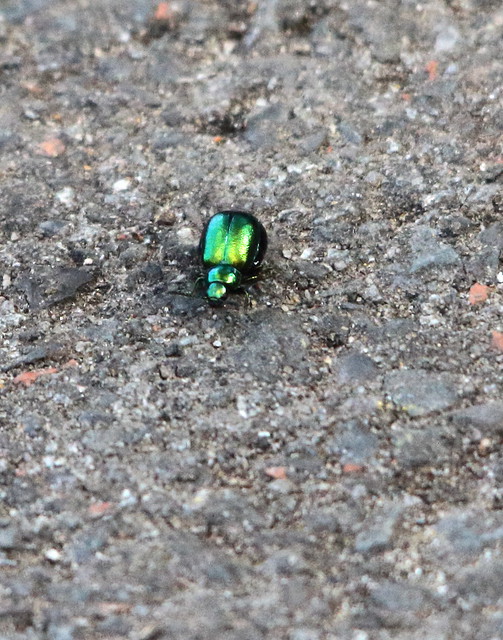 One of the last things I saw on the way back to my car was this small iridescent green beetle. I am no expert but I reckon it is a Dogbane Leaf Beetle.