Move on please, photography not allowed

Well I have read about it in the press but today was the first time that I have been asked to stop taking photos and move on.

On the way into Bradford today I was walking towards Forster Square station when I heard Kestrels calling. Of course I had my binoculars with me, as you do, and used them to find the Kestrels on the building that I think is called Broadgate House. The building is on Manor Row and backs onto the railway line. It is much higher than the station.

The best vantage point was on the end of the platform between two of the lines. It wasn’t until I got home that I noticed that my first few shots had got both the male and female. He is looking straight at me. I had only noticed the female on the end of the hoist. 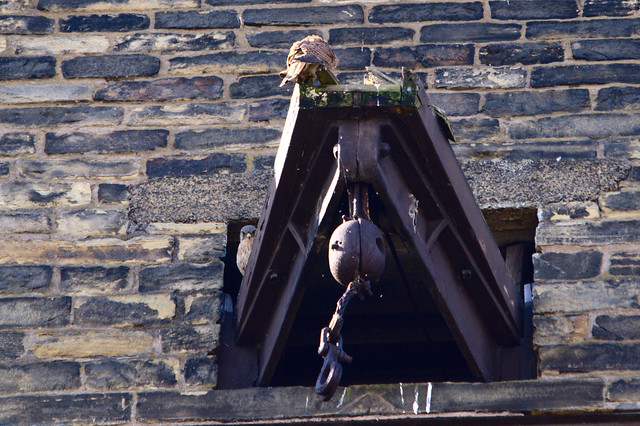 I then noticed the male on the window ledge, obviously after it left the hoist. 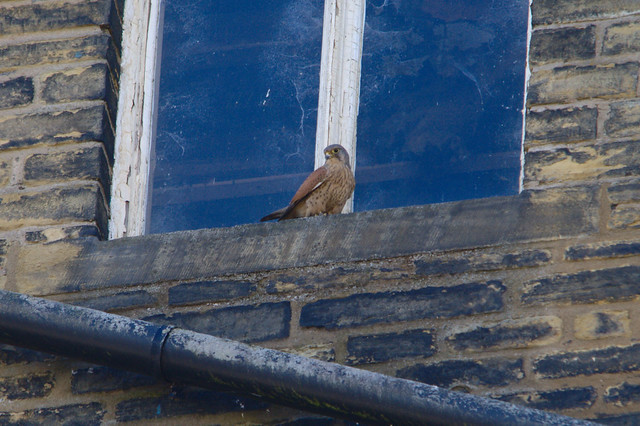 He then flew off to the roof of the neighbouring building where he landed and then almost immediately took off to swoop on his mate. 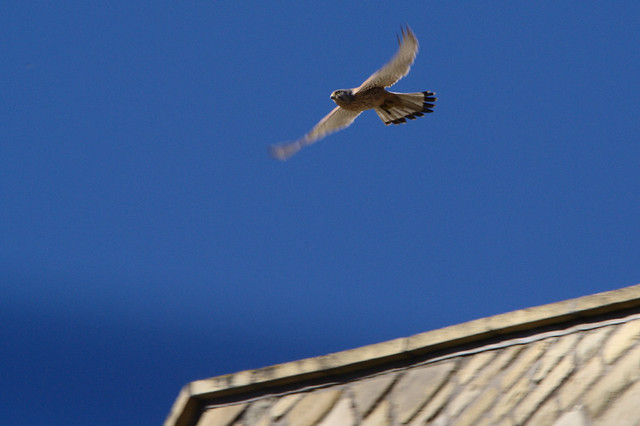 Where they spent a few seconds mating and calling. 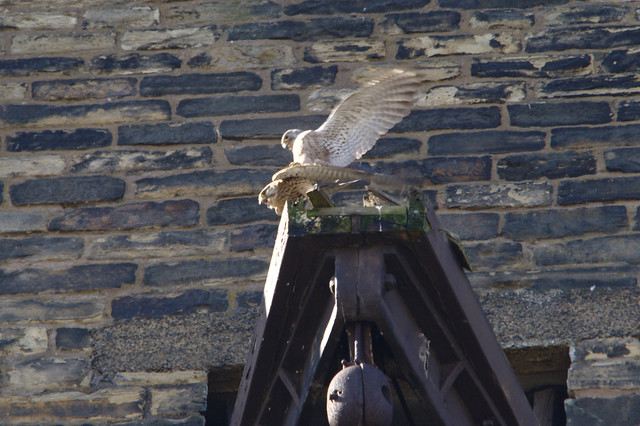 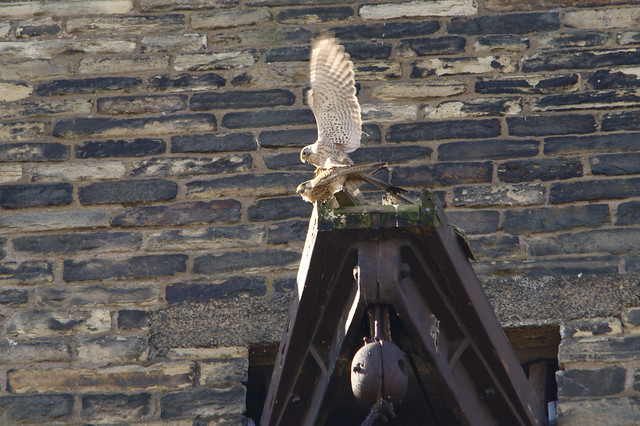 So, by being reasonably quick I had got my photos. Just after that though I was asked by a very pleasant chap with a litter picker to stop taking photos and move on. Some person inside the station building had asked him to ask me to move on. Apparently I need permission to be allowed to take photos on the station. Does that mean that people should not take photos of people they are seeing off at the station unless they have permission?

I was told that the management at the Interchange were the ones to ask for permission. After spending a couple of hours taking photos in Citypark (doing what I have since been told is abusing the right to privacy of those out in public) I went to see the station supervisor at the Interchange to ask for permission to take photos on Forster Square station. Apparently he knew someone had been taking photos at the station and I got the impression that he was the one that had said I should be asked to leave.

Unfortunately he said he was unable to give permission, not because permission was not to be granted, but because I needed to ask someone in York. I have her name, phone number and email address so I will be contacting her for the official response.

I was told that I was not allowed to take photos on the station because of where I was. This had me baffled until it was explained that the people responsible for the bombings in London had “come from round here”. He admitted that I was therefore a potential terrorist. But obviously I was more likely to be a potential terrorist because I was acting strangley with a tripod and 500mm telephoto lens pointing up in the sky in full view of drivers, conductors, passengers and members of the public walking through from Forster Square retail park to Bradford.

I was then asked if I knew how to fix printers because the other person in the office was having trouble. Perhaps he thought I had some experience of handling toner cartridges?

Did you know that during a Prince Charles visit by train that many of the surrounding buildings have police in them – so I had better not take photos of buildings?

I tried to find out what basis the refusal had in law and was told that it was on the Northern Rail website and that it was related to security and also preventing the infringement of the right to privacy of people out in public. It would be a lot more logical if the reason was that I was too close to the platform edge and that using a camera makes me more likely to cause an obstruction to passengers. (Edit: I have since read pages from rail companies where they encourage enthusiasts who are extra eyes and ears but lay down rules about photography based on safety – don’t cause obstruction, keep tripods away from platform edge, don’t photograph what might be their security systems e.g. CCTV equipment and no flash. All very sensible.)

During the afternoon I took lots of photos of people out in public and would have been more than happy to delete any if people had asked. The only requests I had were for taking posed photos. This then led to an exchange of email addresses because my camera does not have bluetooth, Wi-Fi or 3G.

He told me that he had taken photos at Forster Square station at least twice. Once he was asked to stop taking photos. There were no trains and no passengers but it was still “not allowed”. Someone being near him meant he was unable to continue because he needed to be quiet and still, however he had the photos he needed. Being quiet and still meant that the rats in the pipes under the platform started to venture out to get the scraps of food on the track. Any movement and they disapperaed. The member of staff did not seem interested in what he was taking photos of.

On another occasion he turned up early to get a good vantage point for taking photos of Prince Charles on one of his visits. This time he was told it was ok to take photos as long as he made sure he didn’t get in the way of Price Charles or his entourage.

I have now had a look at the Northern Rail website and searched for “photography”. The only result that is returned is for a photography competition they are running.

I don’t know if it would have been any different if I went into the station building beforehand and let them know what I wanted to do. I might then have missed my opportunity.

If I do want to take photos, other than just point and click, on a station again I will call into the building first and hopefully have a conversation where we are both happy.

Edit 2: April 18. It is now a few weeks later and I have yet to have a response from the people at York. I thought the email I sent was straightforward enough but still no answer. I do know that it arrived successfully because I had an Out of Office response.

3 responses to “Move on please, photography not allowed”