Even though the lunch-time walk posting was quite a long one I have decided there were several things missing so here is an attempt to add the missing photos.

The posting is basically to show the things that can be seen on a lunchtime walk from my desk in Salts Mill. I usually walk along the canal, or river to the west, towards Hirst Mill and the weir. I have done my best to put names to the things that are in the photos but I do not profess to be an expert at identifying things so if I have got any of the name wrong pleas let me know. 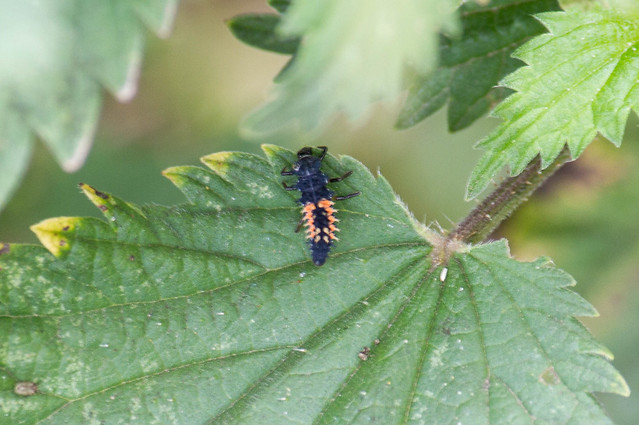 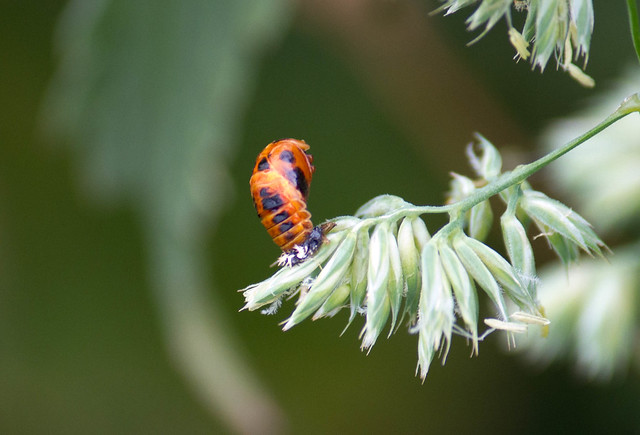 And then a recently emerged Ladybird. Does the lack of spots mean that it is an Asian Ladybird of do the spots darken after it emerges? 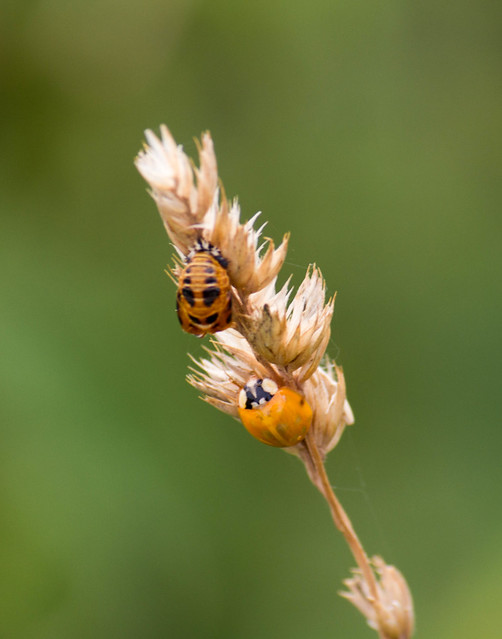 I don’t see many dragonflies or similar along the river. Most of those I have seen locally have been at Denso Marston Nature Reserve. However this is a male Demoiselle Fly on the tips of a nettle that is overhanging the banks of the river at the rowing club. 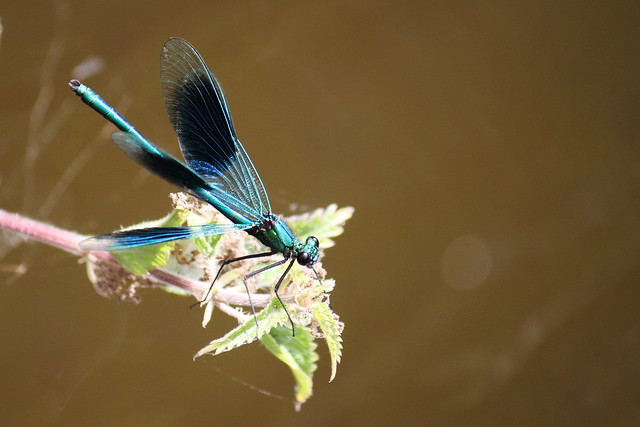 And just near it was this female Demoiselle Fly on the timbers that form the river bank at the rowing club. 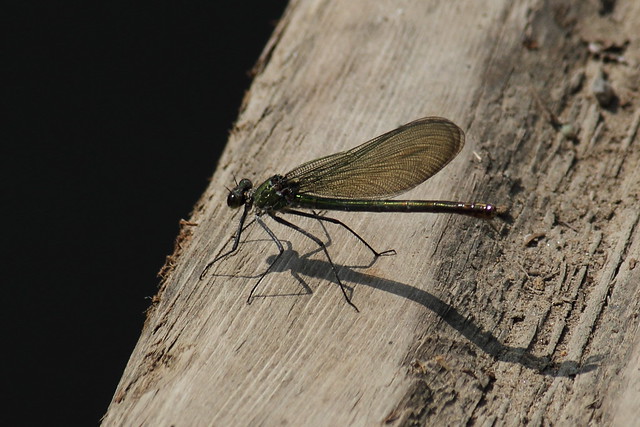 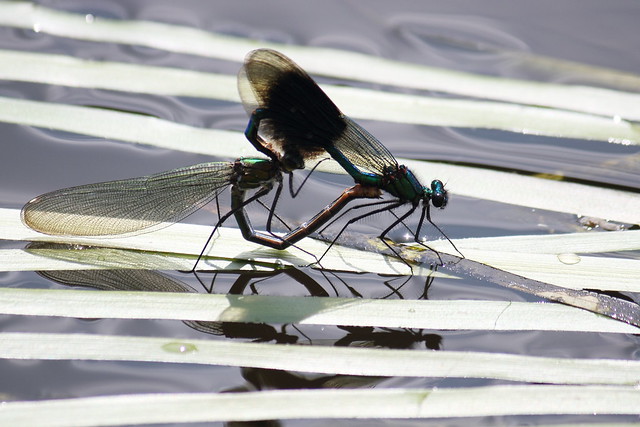 Then on the following day at the same place I saw a female Demoiselle Fly ovipositing (laying eggs) watched by the male. With some species of dragonfly the male helps by forcing the female under water, pushing through the surface tension of the water, so that the eggs can be placed lower down the stems of the reeds. 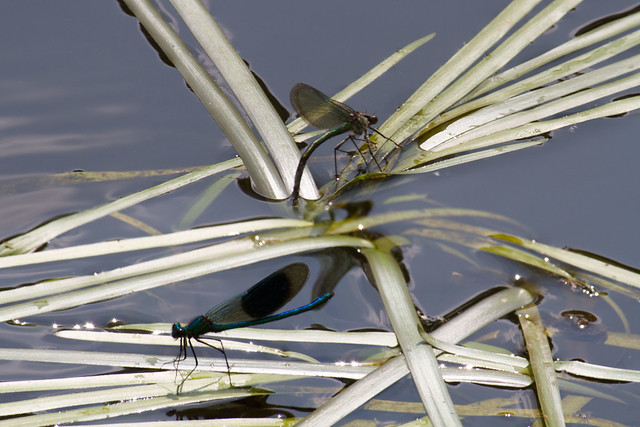 Below is a Female Green Veined White Butterfly. This was taken at the area just past the sports ground in the area close to what was Saltaire garden centre. 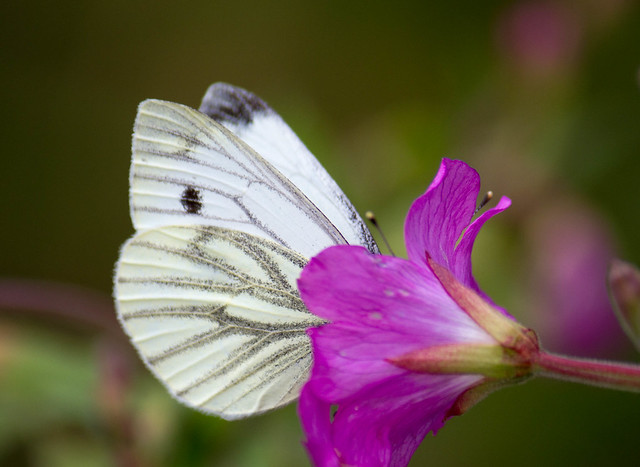 This photo of a Comma Butterfly was taken in the same area. The underside of the wing of the Comma butterfly has a distinctive pale mark shaped a bit like a comma – hence its name. 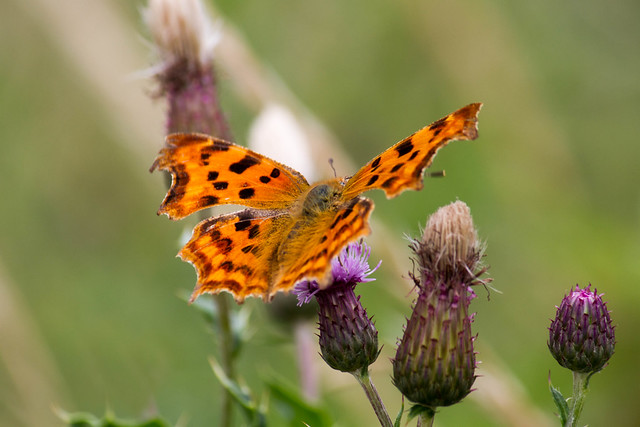 This Ringlet Butterfly is another butterfly seen on my lunchtime walls. 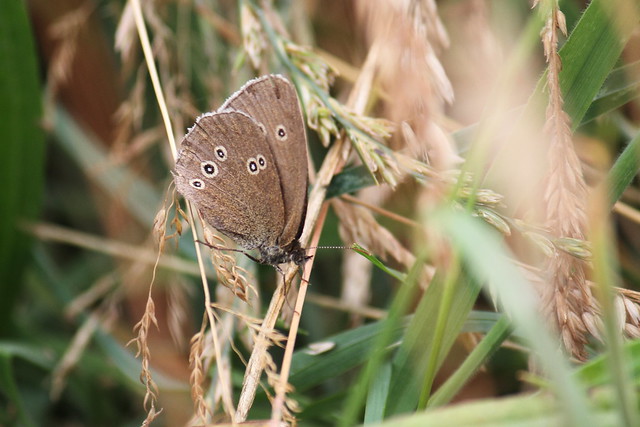 And here we have a Small Tortoiseshell butterfly. 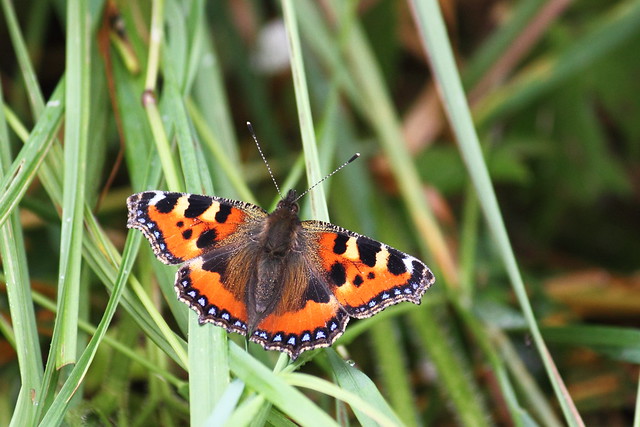 This creature below is a Common Red Soldier Beetle that can often be seen on cow parsley. 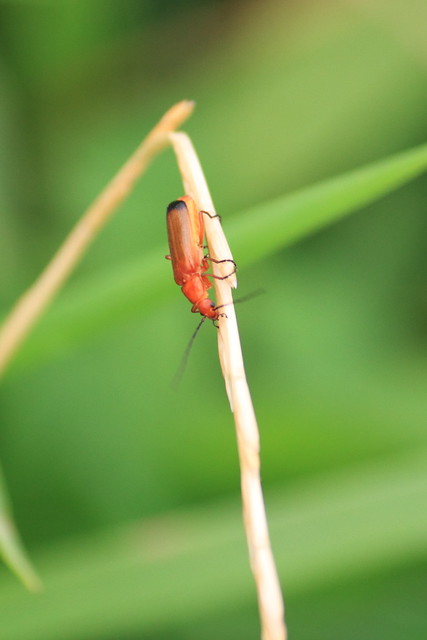 I also saw quite a few Skipper butterflies 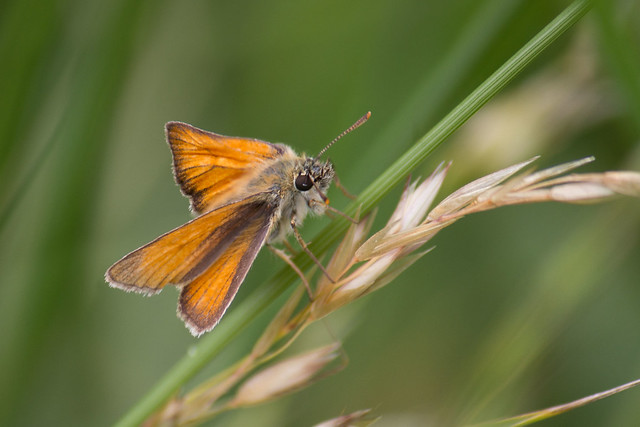 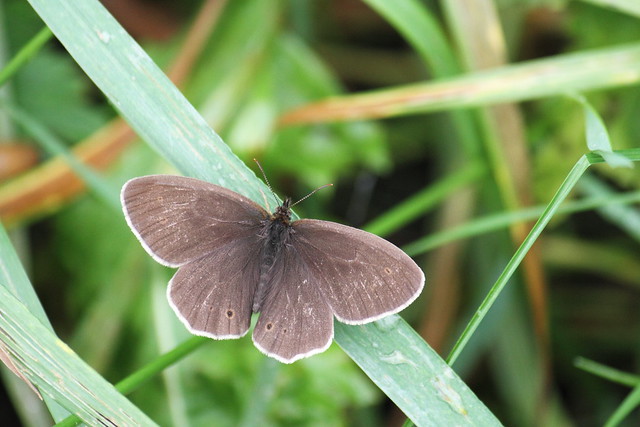 And this one is a Gatekeeper. I wonder how it got that name? 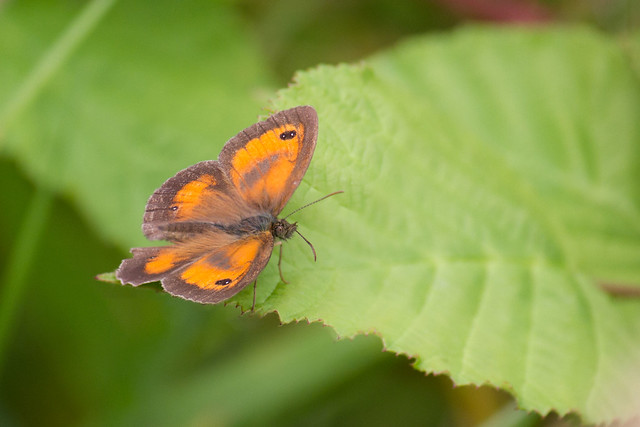 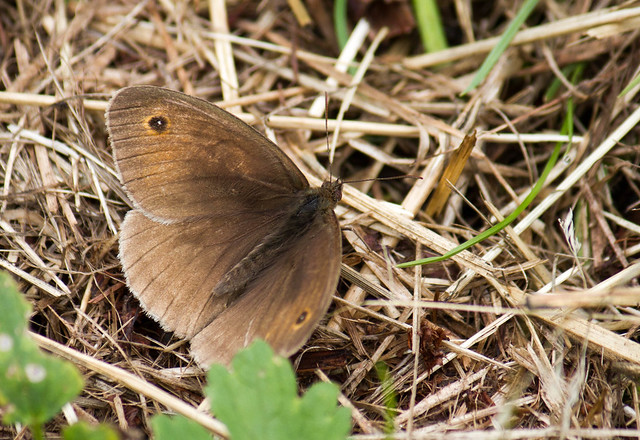 I have not been along to Denso Marston Nature Reserve many times this year so perhaps that is why I have not seen many Goosander. This photo of a female Goosander and chicks was taken from the footbridge over the river below Hirst Mill. I only see male Goosanders during the mating season I don’t know where they go for the rest of the year. 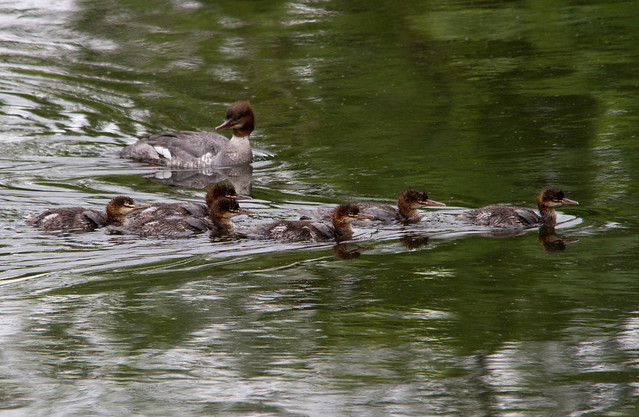 This year I didn’t see many ducklings. I assume it is because there have been so many geese around the canal and river. Hopefully the ducks have been laying their eggs and rearing their young elsewhere. However here is one little huddle of ducklings that I did see by the canal. 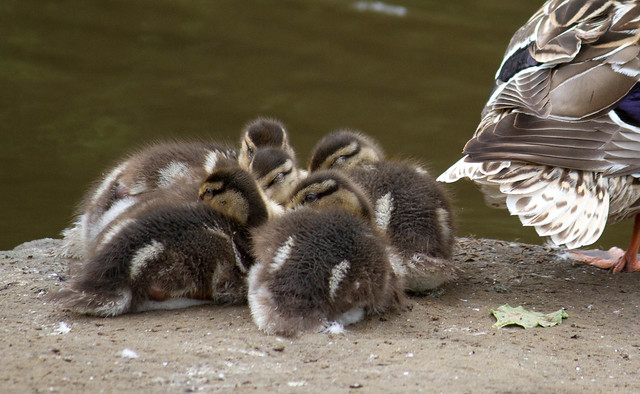 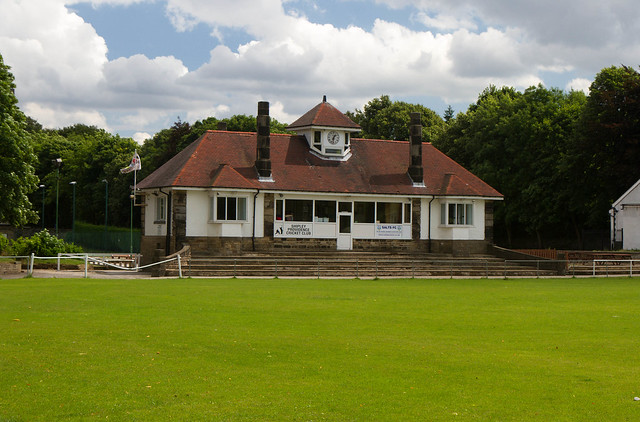 This photo is taken from the same place as the one of the Goosander chicks and is of the River Aire looking back towards Saltaire. The campanile of New Mill can be seen in the V of the trees. It looks quite a distance away but it is less than 15 minutes walk. 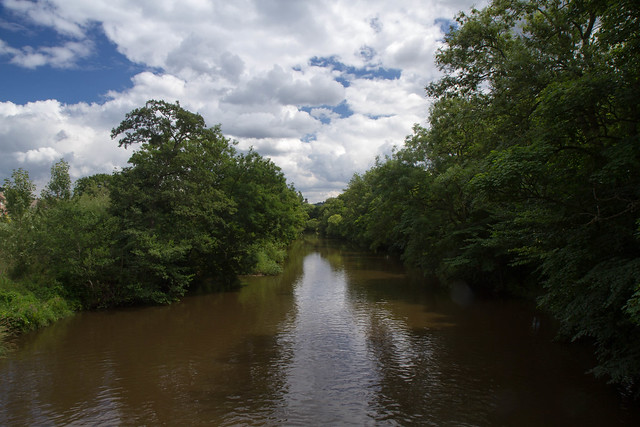