Long term followers of mine might remember this shot. I have posted the same view twice before. We have had some nice clear days recently and from my previous attempts I knew that the best lighting on the subject would be in the evening, with the sun going down on the right. So the other evening I decided to go up near Menston again to try this shot. There might be clearer days in the future (and who knows, I may try again) but considering that Emley Moot transmitter is 16 miles away I might struggle to get a clearer shot than this. 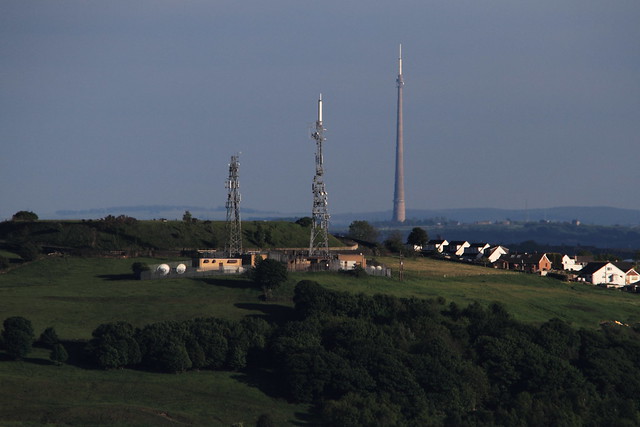 When you think that all of the city of Bradford is between these two sets of transmitters it makes you realise that perhaps city air is not too bad.

For those that are interested it is shot at 500mm with the aperture set to f9 and ISO set to 100. The lens was mounted on a tripod with the legs as short as possible for rigidity. I still had to keep an eye on the shutter speed though. It still needed to be reasonable. I turned auto focus and image stabilisation off (the less twitching going on the better) and set mirror-lock-up with a 2 second timer delay. In that way any vibration from pressing the shutter release and the mirror going up could die down before the shot was taken. There was the odd slight gust of wind that I could feel when holding the camera so I took several shots trying to fire the shutter when all was still.