This is day 4 of the #bradfordphotoaday challenge and the word is Statue. See here for the start of it – marfell.me.uk/wordpress/?p=266

This morning the weather did not lend itself to happy snapping, but I wasn’t to know that things would be a lot better by the afternoon. A cold wind was blowing sleety rain into my right ear on the way along Thompson Lane. I had set off for work 2 minutes earlier than usual which then gave me 5 minutes to try for the obvious statue shot – well it would have done if I didn’t have to drag the wheelie bin out onto the footpath before setting off.

Before leaving for work, thinking that it would be most suitable, I put my 50mm lens on the camera; I didn’t want to be swapping lenses in the rain. I was taking my shoes with me in a small ruck-sack so I left my big back pack (the one I blogged about here) at home and used my small camera bag which is just big enough for the camera with 50mm lens fitted plus my 18-55mm and 55-250mm. I didn’t fancy using my camera in the rain so when I got to Robert’s Park I started taking shots from in the band-stand. I did think at one point that it would have been better with my wider 18-55mm lens but the larger aperture of the 50mm was an advantage because the light was not very bright. I didn’t like the composition of the shots from the bandstand so I went round the far side of the bandstand, away from Sir Titus, and took a few shots from there. I think that made the shots more interesting and you can see the results below. (As usual, click on the photo to see it on flickr) This is the one I submitted for the Day 4 Statue challenge. You can also see what caused all the fuss in the morning – Snow! Several people in IT did not make it in to work – but if you live out at Saddleworth, and work in Saltaire, what do you expect? They also had a power cut so he couldn’t, truthfully, say he was working from home. 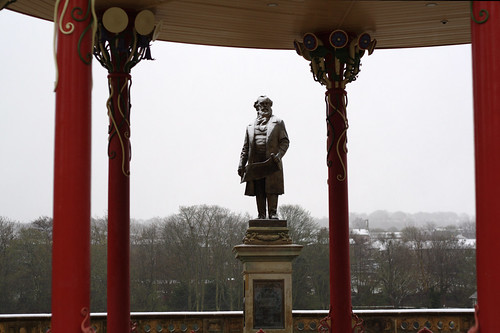 It was difficult to believe that it was only last Wednesday when I went into Bradford and took the photos, from Forster Square station, of the Kestrels, and spent some time in the Media Museum and Citypark in bright, hot, sunshine. I knew it had been reasonably sunny but, as often happens; it was at dinner time that I realised just how hot and sunny it had been. Several times a year the quiet of the dining table finally allows me to notice that my face is hotter and redder than usual – or is it because it needs that length of time for the sun burn to finally make itself noticed?

In the morning I had thought that I would not get a better statue shot than Sir Titus in the snow, but then I noticed our terracotta soldier in the Hub, our canteen. He is so much part of the furniture that I had forgotten about him. But then he doesn’t make a fuss. So before setting off for home I decided to take a photo of him – too late for the #bradfordphotoaday because I had already submitted my Sit Titus. Here he is with a copy of Pace Setter. On the back cover, top left, you can just see one of my photos of a Little Owl. 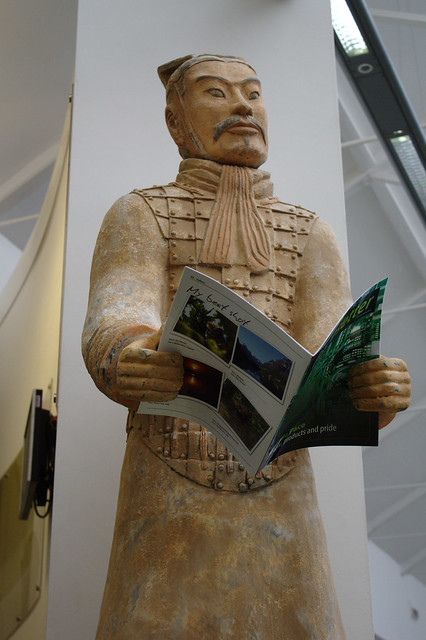 Between the feet of the warrior is a plaque which reads:-

Qin Shi Huang unified China and undertook some gigantic
logistics projects, most notably building the
Great Wall of China, a massive national road system
and a city protected by a life-sized Terracotta Army.

Uniserve are proud to present a replica Terracotta Warrior
to Pace plc to commemorate our partnershop and the
logistices service we provide from China and the rest of the world
UNiserve
www.uniservegroup.co.uk