We have now had day 7 of the Bradford Photo a Day organised by Hidden Bradford. See here for the first posting on this – marfell.me.uk/wordpress/?p=266

Today”s word (??) was “Made in Bradford”. I have seen some of the other photos that show that people have been creative and made things that they have then taken a photo of. Impressive.

For me it was enough to go out and take a photo of something that others in Bradford have made. I know Bradford is local but Baildon is even more local so I called in Pickles for a coffee this morning and had a look around for things made locally. I think Saltaire Brewery is reasonably local 😉 and it”s products are also tasty. Saltaire Brewery is actually closer to Baildon than it is to Saltaire. On foot is certainlay is. The border for Baildon (no passport required) is the river and the brewery is unfortunately just on the Shipley side. 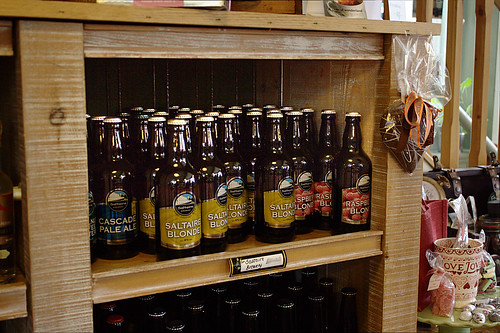 Seeing these bottles on the shelf, almost sparkling with their golden tops, was tempting but instead I went upstairs and had an espresso, a glass of water, and read the photographic magazine I had bought across the road at Martin”s newsagent.

The photo above is the one I submitted for the Made in Bradford day. I wonder how much my thirst was adding to the appeal of the photo?

I also took a few other photos inside. One was of the contents of a cold cabinet with locally made produce. It was difficult to get a view where you could still see the contents without the reflections getting in the way too much. 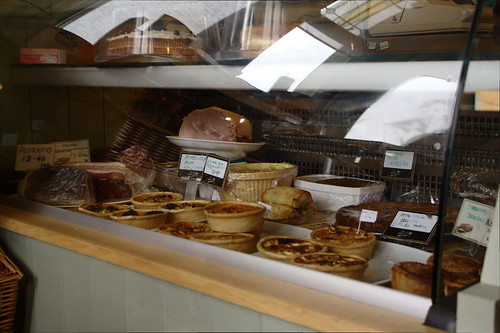 Needless to say I explained to Louise what I wanted to do and asked for permission. Others asked me what I was doing and this trio asked me to take their photo with Julie”s camera. I also took one of my own, see below. Julie, on the left, lives in Australia but when she was younger she lived in Baildon and Louise”s mum used to look after her. She really seemed to be enjoying herself. I hope she will let me know if she would rather this photo did not appear here. 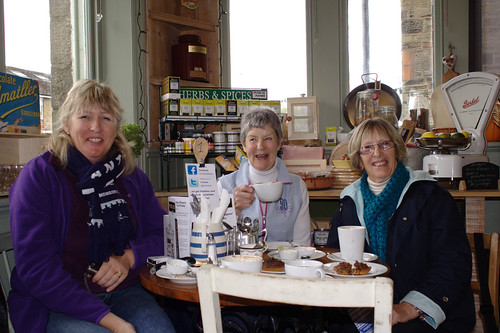 On the way out, by the door, I spotted this hose reel – it is a bit big to miss. This is another contender for Made in Bradford. 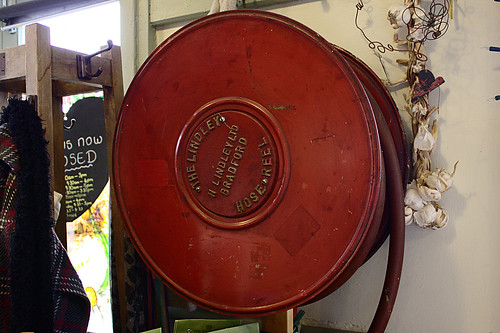 This is the outside of Pickles Deli with the roundabout looking colourful with all the spring flowers. 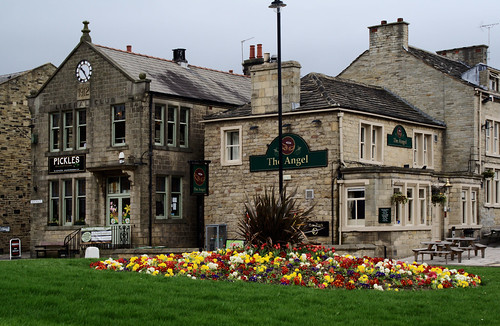 After taking these I went down to get a photo of Saltaire Brewery on Dockfield Road. From Baildon it is quite easy to get to on foot. A bridge goes over the river at the end of Lower Holme. You can also get down to the river bank from the drive that goes into Green”s Gym. I walked along the path by the river for a few yards and could see and hear Chiffchaff, Chafinch, Treecreeper, Great tit, Blue tit, Wren, Great Spotted Woodpecker, Blackbird, Mallard and Goosander. I walked beyond the railway bridge for a few yards and looked up and down the river”s edges for the Black Bellied Dipper (very rare for Bradford) but no luck.

This is the photo of the brewery: 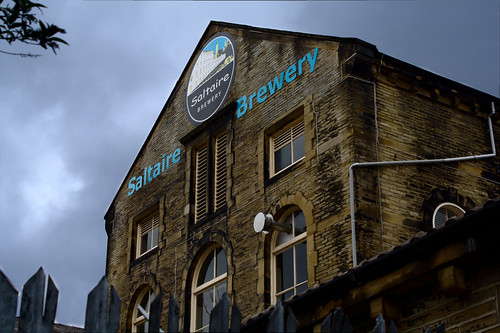 As usual you can click on any of the images to see larger versions of them on flickr.