See here for my blog closer to the start of the challenge – marfell.me.uk/wordpress/?p=266 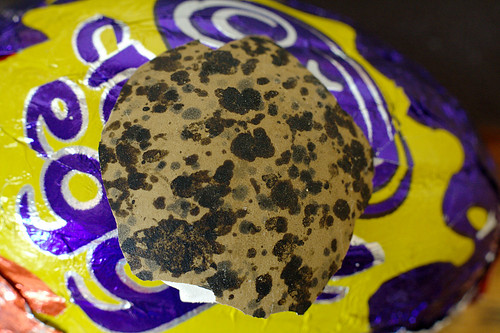 My photo for today is not related to Easter but is related, sort of, to what I am doing at 11am today. My photo is of a small piece of Lapwing egg shell that I found last year on Baildon Moor near Glovershaw. I found it near where Lapwings nest, which suggests that something had carried it a short distance. There are many things that make it difficult for nesting birds on the moor – dogs, people, horses, but probably the most damaging is the number of Crows. Perhaps a Crow had carried the egg off and eaten it? This photo below was taken on February 18 2012. Golden Plover, Starlings and Lapwings were collecting in numbers at that time. 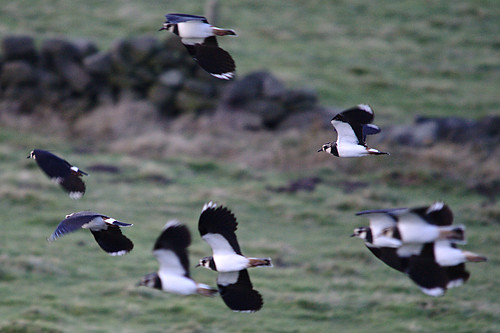 Baildon Moor for its size is one of the highest used areas of moorland in the UK (citation needed). The Friends of Baildon Moor are a group of volunteers who want to promote and protect the moor. There is very little that is as nature intended on the moor since it has been subjected to Man’s influence for 5000 years. This has involved such things as grazing, mining and hosting a tank regiment. But more recently 4×4 and quad bikes churn the place up.

Ideally people who visit the moors would take their litter home with them. For those who don’t want to do that Bradford Council, Baildon Parish Council and Friends of Baildon Moor have all paid for rubbish bins at various locations. For those who are unable, for some reason to do either of these things various litter-pick sessions are organised. The latest one, today at 11am, was organised by the Friends of Baildon Moor. David Sturge and I met at the Upper Eaves car-park and spent a while picking up rubbish. I must say that it was not as bad as I had feared. I can think of 3 reasons why this might be

One of the things that was noticeable while we were doing the litter-pick was the sound of Skylarks in the sky. I frequently stopped and listened and searched the sky for a tiny speck, high up, fluttering its wings as it just hangs in the sky singing its song. 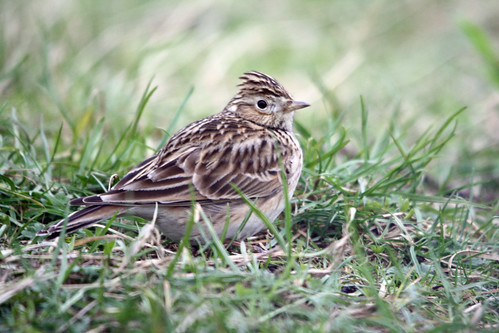 Click on “Play” of this link to listen to the song. You will also see on the RSPB page that the Skylark is on the Red list as being a bird that needs protecting. It is amazing that the birds actaully survive on Baildon Moor. They don’t nest in the bracken, heather or long grass but in the quite short grass – such places as the edges of the fairways of Baildon Golf course.

It has been shown that birds will nest within 20 metres of paths over moorland but that this can increase to 200 metres if dogs are allowed to run free. Moorland is a great place to let a dog run free but to see startled Skylark take to the air as dogs run about is a worry. Signs are up at various locations asking for dogs to be on a short lead between March and July as per the Countryside Code.

As you can see here at the Upper Eaves car park, in this photo taken today, the area is well used –

There are plans to turn the Baildon Moor reservoirs into a diving, boating, education area but before some of the work can be done an investigation has to be done into the structure and make-up of the reservoirs. As you can see, in this photo that was also taken today, the water is now a lot lower than it was a few weeks ago. 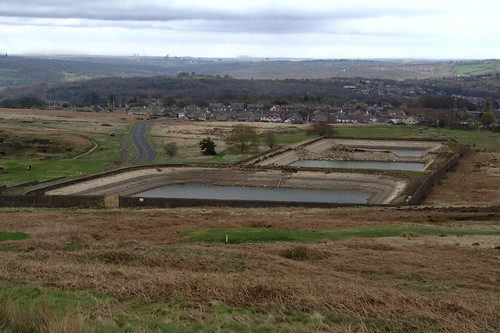 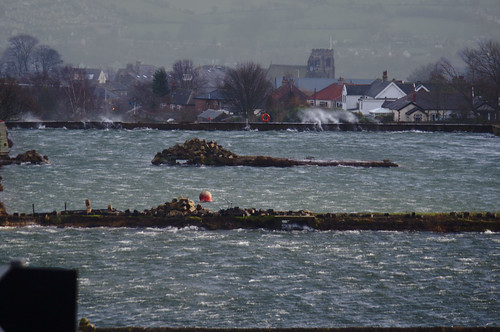